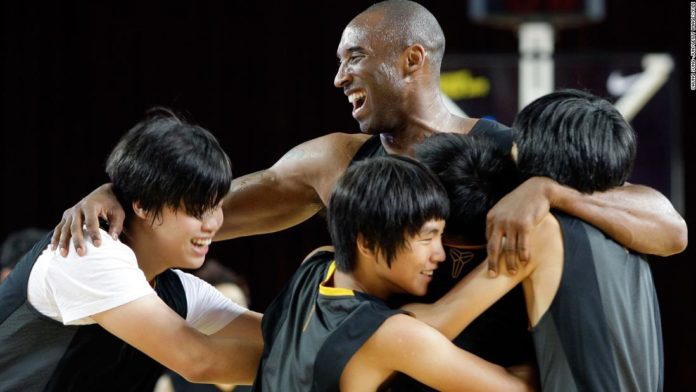 The 41-year-old NBA superstar was among nine people killed Sunday when a helicopter crashed into a hillside in Calabasas, California. His daughter Gianna Maria Onore Bryant, 13, also died in the crash.
Within hours of his death, Bryant’s death became one of the most-searched topics on Weibo, China’s Twitter-like platform, where he had nine million followers, compared with 15 million worldwide on Twitter.
The pinned post on his Weibo account was a short video uploaded on Friday of Bryant wishing his “dear friends in China” a happy Lunar New Year and thanking them for their support for the past year. Underneath that post, tens of thousands of fans have left tributes and messages of mourning.
“Please, don’t you pass away,” read the most liked comment, posted at 3:38 a.m. Beijing time, shortly after news of Bryant’s death first broke.
The former Los Angeles Lakers star remained the most popular NBA star in China, even three years after his retirement in 2016, according to a 2019 report by the Mailman Group, a digital sports marketing company.
Bryant said recently that China was like his “second home.”

“Our faith, our youth”

A whole generation of Chinese basketball fans grew up watching Bryant, as he made his way through the league and into the annals of sporting greats. Along with Michael Jordan, he was one of the first real NBA superstars to win a following in China, which embraced the American sport as the country opened up to the world.
He enjoyed unparallelled popularity as an icon of their youth, when basketball surged in popularity in China.
“You’re our faith, you’re our youth. You’re no one else, you’re yourself,” wrote one user on Weibo, referring to a popular quote from Bryant — “I don’t want to be the next Michael Jordan, I only want to be Kobe Bryant.”
Even China’s state media posted tributes online, praising his fearless fighting spirit and the role he played in introducing basketball to a generation of Chinese people.
“From primary school to university, he accompanied the youth of countless people, and evoked the love for basketball among many young Chinese people,” read a Weibo post by People’s Daily, the mouthpiece of China’s ruling Communist Party.
Bryant’s popularity surged in China in the late 1990s — way before his five NBA championships and two Finals MVPs — with the basketball summer camps he hosted around the country.
By the time Chinese basketball star Yao Ming made his debut in the NBA for Houston Rockets in 2002, Bryant had already led the Lakers to win three consecutive NBA championships.
In the 2000s, with Yao becoming a national hero, the NBA’s popularity quickly grew in China, further cementing the wild veneration for Bryant among Chinese fans.
When Bryant led the US team to win the gold medal at the 2008 Beijing Olympics, he was among the biggest stars in the Olympic village.
He attracted huge crowds wherever he visited China. In 2013, a Chinese fan famously burst uncontrollably into tears when interviewed on television after seeing Bryant in person. A few months later, Chinese fans waited for Bryant at his hotel and chased after his coach in a video that went viral online.
“It’s always about the passion of basketball,” he told state-run China Daily in 2017 on a trip to southern Hainan province. “It just grew and grew to the point which China has become like a second home to me.”
Many in China admired Bryant for being hardworking and devoted to win — his 4 a.m. workouts are not only widely known among fans, but also used by some school teachers as an example to encourage their students to study hard. “Los Angeles at 4 a.m.” was among the most trending phrases on Weibo.
Bryant is also remembered in the country for philanthropy. In 2009, he launched the Kobe Bryant China Fund, a charity set up to raise money for education, sports and cultural programs for youth in China.
However, Bryant’s death comes at an awkward time between China and the NBA — just months after their spat over Houston Rockets General Manager Daryl Morey’s tweet supporting Hong Kong’s pro-democracy protests. The league’s Chinese partners suspended ties, state broadcaster CCTV halted all broadcasts of preseason matches, and the Chinese government said the NBA needed to show “mutual respect.”
But unlike other NBA stars such as LeBron James and Shaquille O’Neal, Bryant did not wade into the controversy, and the spat did not appear to have dampened Chinese fans’ support for him at all. In October, fans watching the Lakers’ games in China still wore his jerseys and held his image even though he had retired from the league.

“Named after my city”

Bryant’s legacy and impact is also felt in Japan. In 2011, Bryant fronted an American Red Cross campaign to raise support for survivors of the tsunami and earthquake disaster that rocked Japan’s northern region of Tohoku. That tragedy left more than 22,000 people dead and missing, and tens of others homeless.
“The NBA family starts with the people of Japan, the survivors of the earthquake and the Pacific tsunami,” said Bryant, in the Red Cross campaign video — now being shared widely again on Twitter.
Bryant’s parents reportedly named him after the famous beef that is produced in Kobe city in Japan. NBA fans from Kobe were among thousands who expressed their gratitude and grief on Twitter.
“I’ve been always proud that I’m from Kobe because Kobe Bryant was named after my city. I’m totally heartbroken. RIP to a legend from Japan,” said Twitter user Fugu.
Kizo Hisamoto, mayor of Kobe city, said in a statement Monday that Bryant held “a special place for the people of Kobe city.”
“Our city had the good fortune of crossing paths with Kobe Bryant as his father named him after the city, given his love of Kobe beef,” the statement said.
“We would once again like to express our gratitude for the support Kobe Bryant gave to this city and offer our heartfelt condolences,” it added.
In 1998, Bryant visited Kobe city and handed a donation of 480,000 yen ($4,400) raised through an Adidas charity event in Tokyo to help support social welfare in the city. Bryant was also an ambassador of Kobe city between 2001 and 2011.
Tributes and condolences from elsewhere in Asia have also poured in. In Taiwan, President Tsai Ing-wen wrote on Twitter that her “thoughts go out to the Bryant family and the families of all those who lost loved ones today.”
“Kobe inspired a generation of young Taiwanese basketball players, (and) his legacy will live on through those who loved him,” she wrote.
In the Philippines, the Philippine Basketball Association (PBA) said it had “lost a dear friend in Kobe Bryant who leaves behind fond memories of seven unforgettable visits.”
“His life was an inspiration and a lesson to everyone that with hard work, dedication and self-sacrifice, nothing is impossible. At 41, Kobe is gone too soon but his legacy will last forever.
“The PBA mourns the passage of a man who has touched the lives of millions,” it said in a statement on Twitter.