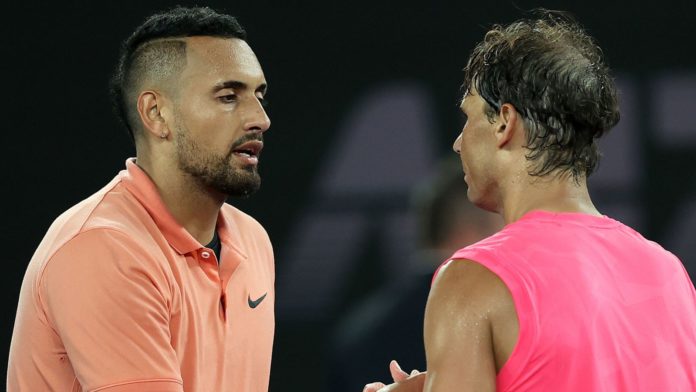 Kyrgios beaten in four sets by Nadal, who will face Dominic Thiem in quarter-finals

Nick Kyrgios said he feels he has “made progress as a human” following his Australian Open fourth-round defeat to Rafael Nadal.

Kyrgios and Nadal have clashed several times in the past, with the Australian calling Nadal ‘super salty’ and mocking his serve during his second-round win over Gilles Simon.

Kyrgios has also been praised for his response in helping to raise money for those affected by the Australian bushfires.

Asked if he feels he has made progress this month, he said: “Yeah, I feel like I’ve made progress as a human. A tennis player, I don’t really care about as much. But yeah, I mean, I feel good. Obviously today was horrendous, like the news [Kobe Bryant’s death]. But I want to keep going in this direction, for sure.”

Kyrgios lost in four close sets against Nadal, recovering from a break down in the fourth to force a tie-break.

Although he lost by the same scoreline at Wimbledon last summer, he said he felt this match against the world No 1 was closer.

“I felt a lot closer this time, especially in the 5-5 game in the third set where I was at deuce a couple times. He played some unbelievable points.

“I felt like if I got that third set, I would have really, really been on top of him. I was kind of feeling the match turn a little bit. If I break in that game, I thought I was going to raise my intensity, my energy.

“I definitely felt a lot closer this time around. The one at Wimbledon, I felt like I wasn’t playing as good, I don’t think. So slow today, though.”

Kyrgios also described the last month as “pretty hectic and pretty emotional”, but added: “I want to try to continue to help where I can.”

Nadal, who is into his 11th Australian Open quarter-final and will next face Dominic Thiem, also praised Kyrgios, calling him a “big talent”.

“When he wants to play tennis, when he’s focused on what he’s doing, I think he’s a very important player for our sport because he has a big talent. Yeah, he’s one of these players that can be very, very interesting for the crowd.

“I am never against his way or style to play. When I criticise him in the past is because I think he did a couple of things that are not right and are not the right image for our sport and for the kids. But when he’s doing the right things, I am the first one who supports this.

“Personally I saw him playing during the whole tournament almost every match, and he has been great, with very positive attitude. I like to watch him play when he’s doing that way. I think everybody likes to watch Nick play when he’s able to play like this.

“His talent is to be one of the best of the world, without a doubt, with good chances to fight for every tournament.”