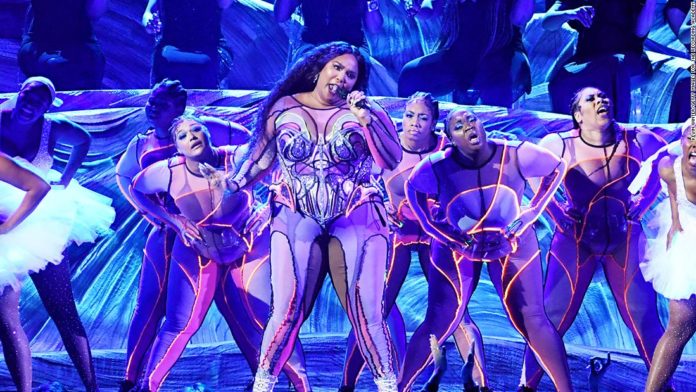 And while she didn’t sweep the awards like some had hoped, she won three and showed that her thoughts were of Kobe Bryant and those killed with him Sunday in a helicopter crash in Calabasas, California.
The 31-year-old singer was one of several celebrities who declined to give red carpet interviews out of respect for those affected by the tragedy.
The 62nd Annual Grammy Awards were held in Los Angeles at the Staples Center — the home of the Los Angeles Lakers for whom Bryant played his entire career.
His death along with his 13-year-old daughter Gianna and seven others was weighing on the hearts and minds of many Grammys attendees.
Clearly that was the case for Lizzo, who kicked off the show saying “Tonight is for Kobe,” before launching into an energetic performance of her hits “‘Cuz I Love You” and “Truth Hurts,” which earned her a standing ovation.
She had been favored to win with her many nominations and took home trophies for Best Pop Solo Performance for “Truth Hurts,”
Best Traditional R&B Performance for “Jerome” and Best Urban Contemporary Album for “Cuz I Love You (Deluxe).”
While accepting the award for “Truth Hurts,” she touched on how quickly life can change.
“I just wanna say this whole week … I be lost in my problems, stressed out and then in an instant, all of that can go away and your priorities really shift,” she said. “And today, all of my little problems that I thought were big as the world are gone and I realize that there’s people hurting right now.”
She ended with some words of wisdom.
“Let’s continue to reach out, hold each other down and lift each other up,” she said. “God bless you, thank you so much.”
Those checking her social media for evidence of her Grammy wins instead found a photo of Bryant, in uniform when he played for the Lakers.