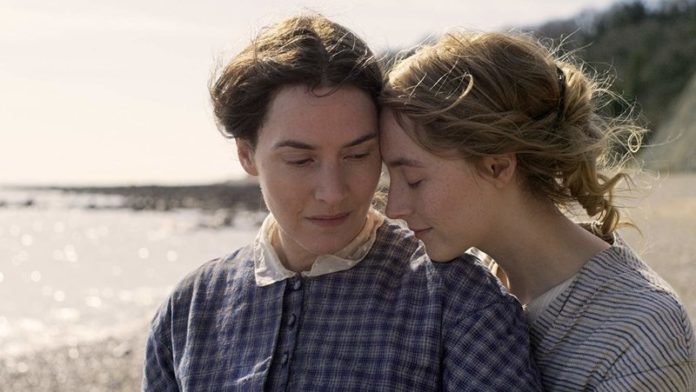 NEON is best for releasing award-winning films such as: the biopic dramedy I, Tonya starring Margot Robbie; the historical drama Portrait of a Lady on Fire; the documentary film Honeyland; and Bong Joon-Ho’s dark comedy thriller Parasite. The latter two had recently received Oscar nominations with Parasite earning a total of six nominations including Best Picture and Best Director.

Set in 1800s England, Ammonite follows the story of an acclaimed but unrecognised fossil hunter Mary Anning works alone on the rugged Southern coastline. With the days of her famed discoveries behind her, she now searches for common fossils to sell to tourists to support herself and her ailing mother. When a wealthy visitor entrusts Mary with the care of his wife Charlotte, she cannot afford to turn his offer down. Proud and relentlessly passionate about her work, Mary initially clashes with her unwelcome guest, but despite the distance between their social class and personalities, an intense bond begins to develop, compelling the two women to determine the true nature of their relationship.

The film is being produced by Iain Canning (Widows) and Emile Sherman (Lion) alongside Fodhla Cronin O’Reilly (Lady Macbeth). It is a production by See-Saw Films with Winslet, Simon Gillis, Mary Burke, Rose Garnett and Zygi Kamasa set as executive producers.

Winslet won an Oscar for her performance in The Reader and has starred in many award-winning/nominated projects over the years, including Titanic, Sense and Sensibility, Iris, Little Children, Mildred Pierce, Eternal Sunshine of the Spotless Mind, and Steve Jobs.

Ronan is an Oscar nominee for her performances in Atonement, Brooklyn, and Lady Bird, for which she won the Golden Globe. She recently earned her fourth Oscar nomination at the young age of 25 for her performance as Jo March in  Greta Gerwig’s Little Women.  Both Winslet and Ronan are part of the star-studded ensemble cast of Wes Anderson’s upcoming drama The French Dispatch.