Home World High School Dissections Are a Science Class Tradition. But Are They Doing...

Each time Karina Frey picked up a scalpel to begin a dissection in her high school science classes, she felt sad. “I’m an animal lover,” she says, “so knowing animals were killed for scientific purposes just made me feel bad.”

Nevertheless, the senior at J.W. Mitchell High School in New Port Richey, Florida, forced herself to do it because she aspires to be a doctor. “I want to be on the medical career path, so I knew I had to do what I had to do,” she says.

Some of her friends couldn’t even bring themselves to do the cutting, so they stood back and looked over her shoulder, Frey says. A friend from a different high school told her dissection convinced her not to go into medicine.

Such concerns aren’t unusual. Studies show as many as 25 percent of secondary students object to dissection. A portion of those suppress their qualms due to internal or external pressure — and, for some, the experience may even turn them away from science classes or science careers altogether.

Not every student fears dissection day, but a new tool may offer a middle ground. A synthetic frog, the SynFrog, is made from materials designed to mimic the look and feel of the real thing. The artificial amphibian could be a better ambassador for science, its proponents say, giving even those leery of the dissection table an introduction to the biological world.

The idea that dissections dissuade students from pursuing a science career is not new. It crops up as far back as a 2000 Society & Animals study whose authors interviewed North Carolina high school students while they were dissecting fetal pigs. They found that, for some students, “it bolstered their convictions that they were not suited for a career in biology or the health sciences.” Another 2013 Society & Animals study found that students who objected to dissection might go so far as dropping a science class or refusing to take it. “When I found out that grade 12 biology consisted of dissecting a rat, I did not enroll myself into the course,” one wrote.

Dorian Solot, now a sex education expert, conducted fieldwork while she was an undergraduate at Brown University, interviewing students at a Rhode Island middle school who were dissecting fetal pigs. “One of the skills learned from dissection is to see the animal as a scientific tool rather than a once-living being,” she says. “For some girls, especially, this transition is difficult and unpleasant. The message is that detachment from caring about animals is a key skill for scientists. If you don’t have it, science may not be the right field for you.”

That idea is also reflected in a 1995 Journal of Research in Science Teaching study that included interviews with girls and their attitudes toward dissection. The authors found that dissection sometimes conflicts with girls’ interest in science and their belief in its purpose, which is “often based on a desire to help people, animals, plants or the Earth.”

Solot documented scenarios similar to Frey’s in her study. Students peeked through fingers while others did the cutting, and a teacher observed that some female students viewed dissection “as kind of a test for them, in their own heads, about whether or not they are cut out for a medical future.”

Do It for Science?

Jan Oakley teaches science education at Lakehead University in Ontario, Canada, and published investigations of secondary students’ and biology teachers’ feelings about dissection in two different journals in 2012 and 2013. Among her findings was that ambivalent students felt pressure from teachers to dissect. “There’s this old-school thinking [about science] that you’ve got to man up and not show your emotions,” she says. “And when I talk to students in my work, some of them had received that very message from their teachers: Suck it up.”

Despite such evidence, as well as studies showing students learn anatomy better through virtual dissection software and a trend away from animal and human cadaver dissection in veterinary and medical schools, many teachers still view animal dissection as pedagogically superior.

“Dissection … is an amazing hands-on experience,” says Vicki Besack, Frey’s anatomy teacher. “[It] has the power to cause a student to change how they think about science and possibly what they may pursue as a career. It gives them that ‘aha’ moment.”

This is certainly true for some students. In the 2000 Society and Animals study, one said moving from dissecting clams, fish and frogs to fetal pigs helped them better understand mammal anatomy. “It sort of came together, the two things. I mean, the fetal pigs really are a lot like humans. I could see the parallels between humans and animals.”

What’s the answer, then, for teachers with both enthusiastic dissectors and students who object? Perhaps it’s animals that look and feel real but aren’t. That’s the idea behind the

The SynFrog is a lifelike alternative to real frogs for classroom dissections. (Credit: PETA)

“There are lots of high-quality dissection alternatives, but most of them are computer-based and teachers were really craving … more of a hands-on, kinesthetic learning experience,” says Samantha Suiter, a science education specialist with People for the Ethical Treatment of Animals. The group teamed up with SynDaver, a veterinary and medical supply company, to create the SynFrog, which was recently unveiled in one of Besack’s anatomy classes.

The 8.5-inch-long model is designed to mimic a leopard frog and has slick, slightly bumpy forest-green skin on its back and smooth cream-colored skin on its belly. It must be kept moist or, just like a real frog cadaver, it will dry up. When students cut into the faux frog, they encounter all the usual organs — heart, liver, gallbladder — colored differently so they are easy to distinguish. Besack’s students say the insides have the same liquid-y feel they’ve experienced when dissecting once-live animals. 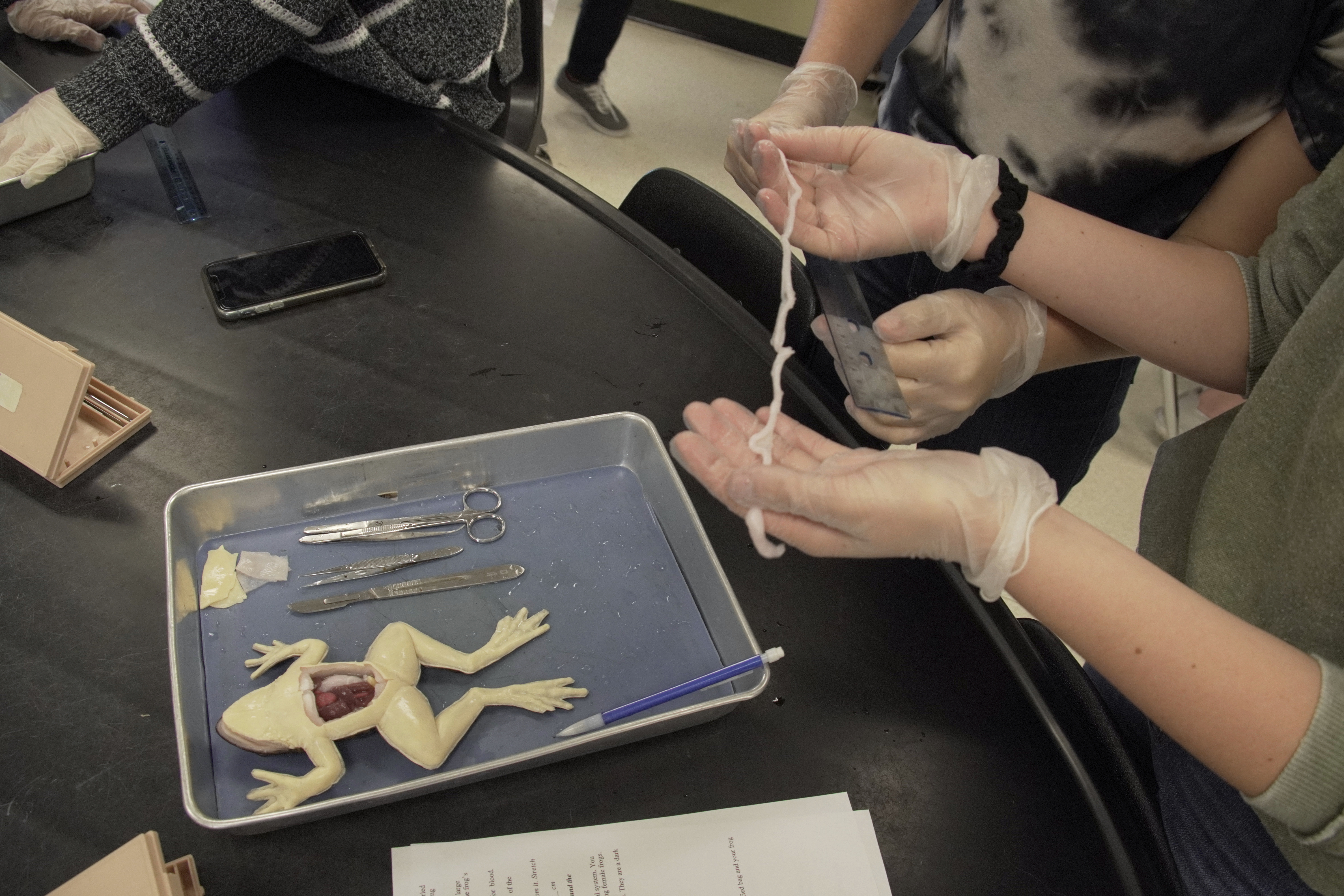 The synthetic frog can be cut open and features simulated organs inside. (Credit: PETA)

Dissecting the SynFrog was much more enjoyable than her previous experiences, Frey says. “You can extract the same exact anatomical information but without having to harm a living organism,” she says. “To me that’s just so important because I really love animals.”

The 18-year-old believes that same compassion will help her connect with patients someday. “I’ll be able to show them empathy and communicate with them so they know they’re not alone in whatever they’re facing.”