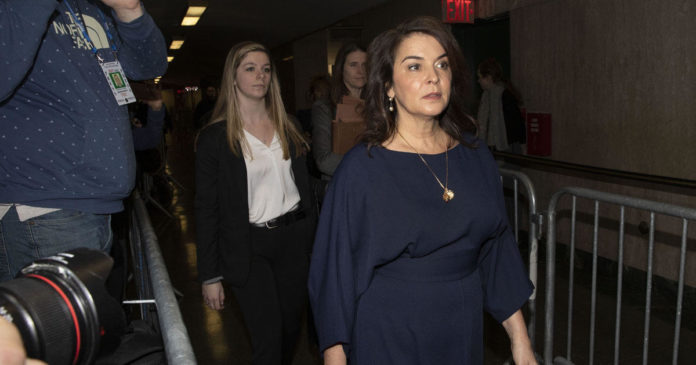 Defense hones in on Sciorra’s actions after alleged attack

Thursday afternoon, Weinstein’s lawyers raised questions about Sciorra’s actions after the alleged rape, asking whether she had once described the encounter as “awkward sex.” She denied that.

The defense also highlighted an August 2017 text message in which Sciorra told a friend she was broke and was “hoping Harvey has a job for me.”

The actress said she was just “fishing” to try to find out through the friend whether Weinstein was aware that a reporter had gotten wind of her accusations. They were first published in The New Yorker two months later.

After Sciorra and the jury were dismissed for the day, the prosecution asked the judge to allow actress Rosie Perez to testify. Sciorra said she told Perez about the alleged attack.

Court is expected to resume Friday morning with the testimony of Dr. Barbara Ziv, a forensic psychiatrist who also testified in the trial of Bill Cosby about impacts of sexual assault on victims.

— Reporting by The Associated Press and CBS News’ Cassandra Gauthier

In a rapid-fire series of questions, Rotunno asked whether Sciorra went to the police, called 911, went to a doctor or hospital or called her friends after she was allegedly attacked by Weinstein.

Sciorra replied she did not.

“At the time, I didn’t understand that that was rape,” Sciorra said.

Rotunno also suggested that Sciorra’s judgment and recollection were clouded by drinking. The actress said she remembered having only a glass of wine with dinner and had kicked a Valium habit that developed after Weinstein sent her pills.

In opening statements on Wednesday, another Weinstein lawyer, Damon Cheronis, argued the encounter was consensual, not rape, saying Sciorra once told a friend that she “did a crazy thing and had sex with Harvey Weinstein.”

— Reporting by The Associated Press and Cassandra Gauthier

Weinstein attorney presses Sciorra on details of her account

Weinstein attorney Donna Rotunno questioned Sciorra about details of her account in a cross examination. When Sciorra replied it’s “not correct” that she could not remember the month or year she was allegedly assaulted by Weinstein, Rotunno pressed, “You think it’s some time in the fall and winter months of 1993 or 1994. That’s a span of 4, 6, 7 months.”

Rotunno asked if Weinstein said anything to her after he first entered the apartment, when Sciorra said he pushed through the door, came towards her and started unbuttoning his shirt. Sciorra said she didn’t recall the exact words, but that Weinstein was trying “in a friendly way to cajole me” into the bedroom. When Rotunno asked her whether she told that information to the district attorney, Sciorra said no.

Rotunno asked whether Sciorra fought back when Weinstein first put his hands on her, as Sciorra said she was in a hallway and backing into a bathroom. Sciorra replied she didn’t, but that she “was yelling at him to get off of me.”

“This remains between you and I”

When Sciorra ran into Weinstein about a month after the alleged attack and confronted him about what had happened, he parried, “That’s what all the nice Catholic girls say,” she testified.

Then, she said, he leaned toward her and said menacingly: “This remains between you and I.”

“I thought he was going to hit me right there,” Sciorra said.

For more than a quarter-century, Sciorra told her story to only a few people close to her. She came forward publicly to The New Yorker in 2017, telling the magazine that for years she had been “so ashamed of what happened.”

Actress Ellen Barkin, who was seen in the courtroom gallery, tweeted: “All my power, all my heart, all my strength I give to you dear friend and warrior … #AnnabellaSciorra I love you. “The truth will out” #MeTooTooManyTimes

— Reporting by The Associated Press and Cassandra Gauthier

Sciorra gave emotional testimony, saying Weinstein pushed his way inside her apartment after a dinner in late 1993 or early 1994, then pinned her to a bed and raped her. She described being overpowered by Weinstein and trying to fight back.

“I was trying to get him off of me…I was punching him, I was kicking him, and he took my hands and put them over my head.”

Sciorra raised her hands above her head and clasped her wrists, facing the jury.

“He got on top of me and he raped me,” Sciorra said.

She said Weinstein then put his mouth on her vagina, saying, “This is for you.”

“I didn’t have very much fight left inside me at this point …there was not much I could do at that point, my body just shut down,” Sciorra said. “It was just so disgusting that my body started to shake in a way that was very unusual.”

After the attack, she said, she began to drink and cut herself. Sciorra said she didn’t call the police because Weinstein was “someone I knew.”

“I would say I felt at the time that rape was something that happened in a back alleyway in a dark place by somebody you didn’t know,” Sciorra said.