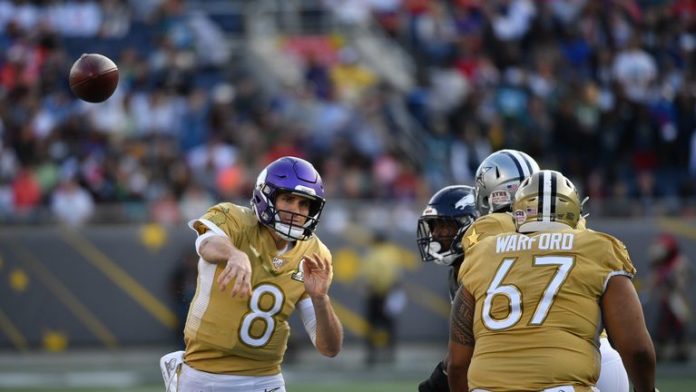 Ahead of Super Bowl LIV, Sky Sports’ lead NFL writer James Simpson guides you through the madness in Miami…

We are just days away from the culmination of the NFL season, and the biggest event in American sports.

Follow all the action of Super Bowl LIV between the 49ers and the Chiefs with Sky Sports!

However, the drama and excitement surrounding the game isn’t just limited to Sunday, as there is chaos throughout the week with the media frenzy on Radio Row and along South Beach.

Below, I will attempt to guide you through the build-up to Super Bowl LIV, and provide insight into what goes on behind the scenes…

Unlike plenty of our pundits and production team, this Super Bowl will be my first. Up until this point, the maddest media scrum I’ve encountered is a post-game locker room at Wembley Stadium. But that was nothing compared to ‘Super Bowl Opening Night’ in Marlins Park.

Essentially, it is every reporter under the sun crammed into an event hall trying to get their questions in to the two Super Bowl participants – one team at a time.

Before tonight (I arrived in the country three days ago), jet lag had been a factor. After the bright lights, the drum lines, the big screens, the fans and the absolute chaos, there’s no chance of that coming into play tonight!

To begin the week’s proceedings, I was following around our man, ‘Coach’ Jeff Reinebold as he attempted to get some time with various players and coaches.

There were tears as he was reunited with Chiefs’ practice squad receiver Gehrig Dieter, another catch-up with Chiefs broadcaster – and former NFL long-snapper – Kendall Gammon, and a great discussion about Tarvarius Moore’s ascension from Southern Mississippi to the Niners.

Ultimately, though, the media flocked to the big names and the stories of the week. We heard Jimmy Garoppolo say former New England Patriots teammate Tom Brady had wished him luck – a simple text message that will hit the headlines, while Richard Sherman raved about Mahomes and his ability to move around the pocket.

Who are the Super Bowl finalists?

What do you need to know about the 49ers and Chiefs, the two teams competing in this year’s Super Bowl?

After a manic three hours, I got a taste of what to expect as we get closer and closer to the NFL’s finale, as the hype continues to grow.

It’s just the start in what will be a manic week of build-up, continuing with Chiefs availability first thing tomorrow morning. Best get to bed!

After the long nine-and-a-half-hour flight from London to Orlando, I was lucky enough to head out early to experience the Pro Bowl, the NFL’s all-star exhibition game, on Sunday, January 26 in which Lamar Jackson and the AFC out-lasted the NFC 38-33.

Exhibition might even be an overstatement, as we know by now it’s simply a fun, play-around scrimmage. The highlight of the weekend was no doubt speaking to some of the NFL’s top stars.

How do you prepare for a Super Bowl?

Ahead of Super Bowl LIV, two former winners – Lane Johnson and Jason Kelce – told Sky Sports what preparing for the big game is like.

On Saturday, after the ‘practices’ (15-20 minutes of light jogging in the sun), players from both conferences took time to speak to fans, sign autographs and answer questions from the media, and after Sunday’s game, the locker rooms were opened up to the media.

Philadelphia Eagles’ linemen Lane Johnson and Jason Kelce gave me some fascinating insight into what the emotions are for players preparing to play in the Super Bowl, some of the best players in the game raved about Patrick Mahomes and how hard he is to defend, and Saints’ tight end Jared Cook ran the rule over the star tight ends in this year’s big game – George Kittle and Travis Kelce (watch out for this later in the week!)

With the audio in hand, it was time to head to Miami…

@SkySportsNFL are in Miami all week – follow us for live video and a flavour of the madness.