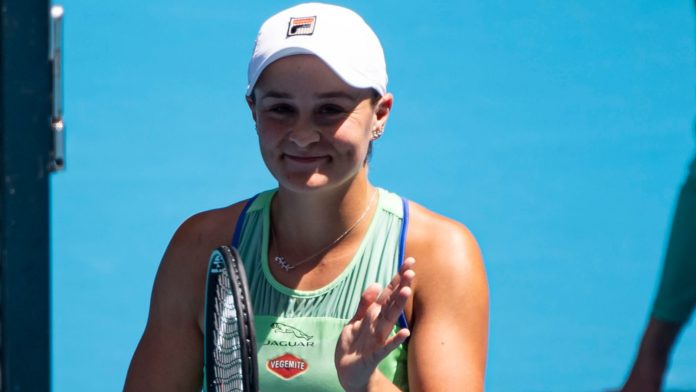 Dreams of a home winner at the Australian Open grew more real on Tuesday as Ashleigh Barty produced a brilliant display to beat Petra Kvitova and reach the semi-finals.

The world No 1 is the first Australian woman to make the last four in singles since Wendy Turnbull in 1984 and is aiming to become the first to lift the trophy since Chris O’Neil six years earlier.

It was at this stage last year that her challenge foundered, Kvitova powering her way to a straight-sets win, but Barty has become a Grand Slam champion and the best player in the world since then.

A tight first set could have gone either way but it was Barty who came through it on a tie-break, saving one set point, and she was in complete control in the second to win 7-6 (8-6) 6-2.

“It’s been absolutely incredible, I knew I had to bring my absolute best against Petra,” Barty said on court. “I think Petra, in my eyes, is the perfect competitor.

“Regardless of whether she wins or loses she’s always got a big grin on her face. I absolutely love testing myself against her.”

It was early in the day for the headline match and spectators were still making their way to Rod Laver Arena as the contest began.

Kvitova was not hanging around, crushing the ball into the corners to break for 2-1 but then playing an error-strewn game to hand it straight back.

It was the theme of the set, with the Czech, who was beaten in the final by Naomi Osaka 12 months ago, going for broke and seeing mixed results.

I’m going to have nothing but a massive smile on my face when I walk out here on this beautiful court.

Ashleigh Barty on facing Sofia Kenin in the semi-finals

Barty played her part, using her all-court skills to deflect Kvitova’s power and digging in with all she had when it got tight.

She saved five break points in a long seventh game and two more at 5-5 before winning the final three points of the tie-break.

Having worked so hard to gain the advantage, Barty was not about to let it go, and she clinched victory with an ace after an hour and 44 minutes.

In the last four, the 23-year-old will take on 14th seed Sofia Kenin, who reached her first Grand Slam semi-final with a 6-4 6-4 victory over Ons Jabeur.

The most surprising of the last-eight clashes was also a contrast of styles between the steady, driven Kenin and Tunisian Jabeur, who possesses a magic box of tricks but does not always know how best to deploy them.

In the end, American Kenin came out on top, and this victory takes her to the verge of the top 10 with potentially more to come.

“Obviously she’s having an incredible run, she’s really developed her game over the last 12-18 months,” Barty said of the Moscow-born Kenin. “It’s about me trying to get my running shoes on again.

“I’m going to have nothing but a massive smile on my face when I walk out here on this beautiful court.”