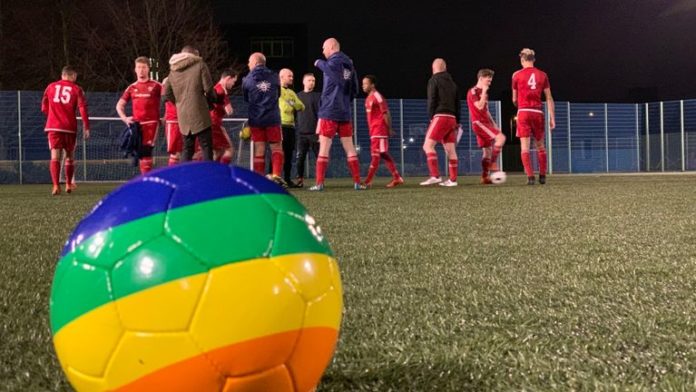 By Jon Holmes and Peter Stevenson

The “horrendous” amount of abuse they endured in a recent league match is spurring gay and inclusive club Village Manchester FC to demand urgent action on tackling homophobia in football.

VMFC will celebrate its 25th anniversary next year but senior figures at the non-league club say the Football Association’s lethargic disciplinary procedure on discrimination is threatening to curb progress.

James McNaught, the Village chair, wants the FA to speed up its “broken” process and deliver better training of referees. Unless the system is significantly improved, he fears some of the club’s players – regardless of their sexuality – may give up on the game due to anti-LGBT discrimination.

“You used to get the odd comment but over the past three years, this has been an increasing problem,” McNaught tells Sky Sports News. “This season alone, we’ve had three separate incidents of abuse that we’ve had to follow up with the FA.

“I think what happens on the pitch is indicative of what society is like generally. This is a problem that we need help with.”

Village put out a call for action just over a fortnight ago, after their first team had travelled to Oldham to face their Chadderton Park FC equivalents. Both teams are chasing promotion from the Lancashire and Cheshire Amateur Football League Division Three, the 12th tier of the national non-league pyramid.

“We knew it was going to be a bit feisty,” says midfielder James Wilson, who like McNaught is a club stalwart. “First half, there were a few choice challenges going in.” The teams were level at 1-1 at the break. After the restart, the atmosphere became – in McNaught’s words – “pretty toxic”.

“It was from players on the pitch and also from supporters on the sidelines. It quickly descended into lots of homophobic slurs and xenophobic comments too,” he explains. “We reported it to the referee as per the guidelines given to us, and he acknowledged it – but he didn’t follow protocol as we’d expect.

“I actually felt sorry for him. He was only a young ref and handled the game itself quite well. However, he didn’t act as we might have hoped in dealing with the abuse.”

Wilson says the insults were “constant” for the final half-hour of the match. “For example, one of our players got badly hurt in a tackle, and you’ve got a player standing over him saying ‘get up you fairy, get up you fairy’. And the referee’s standing close by.”

You don’t want to be tarred with that kind of language. It’s hurtful. Homophobia is keeping away a lot of players who are gay from playing football.

Village goalkeeper Jeremy Baker was closest to the abuse being shouted from the sidelines. “They had about 30 fans there, yelling vulgarities from the sidelines.” On the pitch, there was elbowing from opposition players – but that wasn’t the worst of it for Baker. “I had somebody come up from behind, put me in a bear hug and literally lift me off the ground,” he says.

This was no isolated incident for the American. “That’s the fourth time I’ve been physically assaulted in matches in the last four years. It gets to a point where you think, is it worth it, dealing with the hassle of what people say and physically what they do?

“The love of the sport makes me carry on, and what this club is trying to do. I know a lot of players who have joined and said, ‘where I was playing at before, I didn’t feel safe with the language in the changing room, and the atmosphere didn’t feel comfortable at all’.

“Probably about 30 to 40 per cent of this team are straight, and they like the atmosphere here. There’s no pressure to ‘be anybody’ – you just have fun, enjoy football and have people there who support you and care about you.”

There’s no need to throw words around or even be violent towards another person just because of who they happen to be.

Baker says the verbal insults carried “a lot of venom” and Sky Sports has learned of other UK gay and inclusive men’s football clubs playing in local leagues that have experienced similar abuse, and have met with the same frustrations after reporting the incidents to their local FAs.

Wilson is one of the more battle-hardened Village players – “I’m quite adversarial,” he admits – but he has not become numb to the slurs, and says the damage it causes often goes unseen. “I’ve been called a nonce and all sorts of stuff, and that’s really upsetting and hurtful.

“Homophobia is keeping away a lot of players who are gay from playing football. Most of the time we’re winning games – that’s the best answer to a lot of it. But when it spills over into that kind of abuse, you can see why players who have just joined us are going to find it difficult, and also the referee who’s had a tough time trying to control that.”

Whoever the opposition, Village are always sure to report any in-game abuse they experience to the referee and when necessary, through the Manchester FA. It made no difference that out of all the clubs in their league, Chadderton Park should not have been the ones to resort to bullying tactics.

In August, they had been named Grassroots Club of the Year by the FA, whose website noted how “Chadderton Park don’t just pride themselves on inclusivity; it defines the club’s entire ethos.” The award was well-deserved too, with the Oldham outfit having grown to over 90 different teams encompassing a wide range of age groups and abilities.

To Chadderton Park’s credit, their response to Village’s complaint was swift and decisive. They have stood down their first team amid an internal investigation, while issuing a strong statement vowing to take “appropriate action” against anyone responsible for discriminatory abuse.

McNaught says Chadderton Park have been “fantastically supportive” but with Village yet to hear back from the FA on the other two incidents they reported earlier in the season, his faith in the authorities is rapidly diminishing.

He said: “The guidelines are that they [the FA] have 180 days in order to resolve these cases. For me, six months is too long a process and from our experiences, it just doesn’t work.

“The FA’s process is broken. They need to review it and say, how can we do this better? Because for us, one incident happened over three months ago now and we’ve heard nothing formally as to where that process is at. The communication is poor.

“So now we’re thinking, what’s going to happen next? We’re meant to have a reverse fixture against this particular team, who homophobically abused us back in October. That presents issues. What are we to do?

“We need the FA to be better for us because my players have told me, as chair, that they do not feel protected.”

VMFC statement on homophobia in football.

John Bridges has been with Village since 1997 – a time before equal marriage and the Equality Act, when Section 28 was still law and homophobia in football was endemic. There may be greater awareness of LGBT inclusion in sport nowadays but he says resolutions on discrimination remain as sluggish as they were back then.

“We’ve come to this having tried the existing procedures and found them not fit for purpose,” he says. So what needs to change? “I certainly think we need more support for our referees, because the ideal solution is that this is dealt with during the game, and not something we have to deal with afterwards.

“At these lower levels of the game, referees don’t have the same level of training as Premier League officials do. We have huge amounts of money going into the game – some of that should be trickling down.”

In 2017, we had a game where we had an issue that went to a complaints procedure. It took seven months for that to come to a resolution. We had to play that team again in that period.

From Village’s Trinity Sports Centre home ground in Hulme, it’s a 20-minute journey west to Old Trafford and it takes only a little longer to reach the Etihad to the north-east. They may live in the shadow of two of the world’s richest clubs but they are no less passionate about the game.

“It’s our outlet, the way we express ourselves,” says forward Fernando Martins. He says nothing will stop him from playing but wants people to know that the game is sometimes far from beautiful for him and his team-mates. “Coming to the field to hear this kind of nonsense is not right.”

The FA has recently launched a new initiative called ‘Tell Us, We’ll Tackle It’, in a bid to encourage more reporting of abuse at grassroots level. It claims “an updated reporting process and website means all completed online forms will be sent directly to the relevant FA and County FA staff so they can begin any investigation process immediately”.

Meanwhile, next week sees the start of the Football v Homophobia campaign’s annual month of action, in what is also LGBT History Month in the UK. Going forwards, Village Manchester will continue to impress upon the FA that this particular form of discrimination can be tackled more effectively.

By doing so, more people – whether LGBT or not – will get to enjoy the sport. As the club’s motto says – ‘we don’t care who you love, as long as you love football’.

Sky Sports supports Stonewall’s Rainbow Laces campaign for LGBT+ inclusion in sport, as a member of Team Pride. If you’re interested in sharing your Rainbow Laces story, get in touch with us.