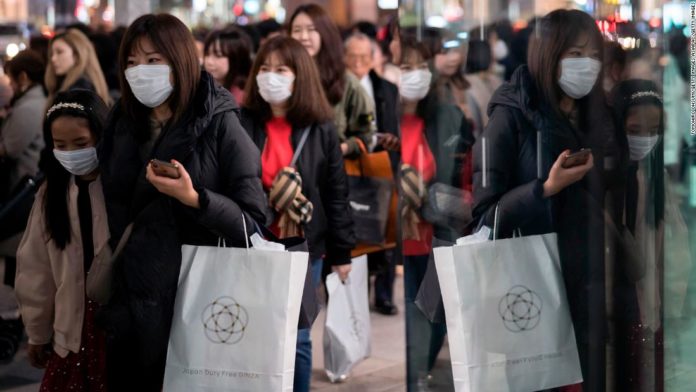 Tokyo (CNN) — The phone lines at Kamome, a Tokyo-based travel agency that specializes in tours for Chinese travelers, haven’t stopped buzzing for the last three days.

On Sunday, China announced a ban on outbound group travel as part of its battle to stop the spread of the Wuhan coronavirus, which has killed 82 people and infected 2,700 in the country.

That has caused cancellation mayhem for Kamome’s staff as more than 20,000 of the company’s Chinese package tour customers pulled the plug on all trips to Japan up to February 10.

With Japan receiving approximately 9.6 million visitors from China in 2019, accounting for a third of foreign tourist expenditure in the country, speculation is growing around the ramifications the travel ban will have on Japan’s tourism industry and economy.

“We are concerned about the decrease in Chinese tourists, but we cannot foresee the outcome as it depends on how long the (Chinese) policy lasts,” Japan National Tourist Organization (JNTO) spokeswoman, Shiho Himuro, told CNN.

People wearing masks walk through the Ginza shopping district on January 24 in Tokyo. The city is a popular destination for Chinese tourists during the Lunar New Year holiday.

This isn’t the first time staff at Kamome have dealt with cancellation mayhem. Back in 2003, the fatal severe respiratory syndrome (SARS) — which first appeared in southern China — also prompted a slate of cancellations that staff said they eventually overcame.

In another area of Tokyo, there are concerns for those in Wuhan who have been directly affected by the coronavirus.

“We just hope that this situation gets resolved quickly,” says a spokesperson from Hankyo Travel International, a major Tokyo travel agency.

While it’s often news of diplomatic spats between China and Japan that make headlines, in recent years the growing number of Chinese visiting Japan for holidays has shifted attitudes, tastes and foreign policy.

Across Tokyo, announcements in train stations and department stores also posted in Chinese. A remarkable thawing of Beijing-Tokyo relations took place in 2018 as Chinese Premier Xi Jinping and Japanese Prime Minister Shinzo Abe held telephone talks for the first time to discuss denuclearization of the Korean Peninsula.
Researchers also suggest that Chinese impressions of Japan and its people are changing, with more reporting a favorable view of Japan after visiting the country.