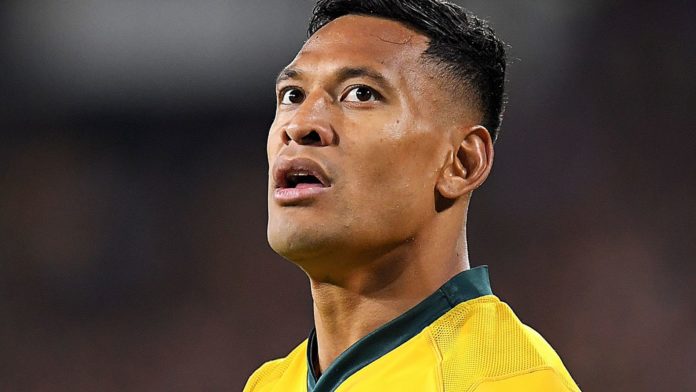 Israel Folau has joined Super League side Catalans Dragons on a one-year contract following his sacking for anti-LGBT posts on social media.

Folau reached a settlement with Rugby Australia in December having sued for £7.4m on the grounds of religious discrimination – after his contract was terminated in May.

The 30-year-old scored 37 tries in 73 Test appearances for Australia’s rugby union side, but now returns to the code in which he started his professional career.

“I acknowledge the views expressed by Super League and the Rugby Football League,” Folau said in a statement.

“I’m a proud Christian, my beliefs are personal, my intention is not to hurt anyone and I will not be making further public comment about them.

“I look forward to my return to the great game of Rugby League with the Catalans Dragons.”

Folau began playing in Australian’s National Rugby League aged 17 in 2007 and went on to score 73 tries in 91 games in the competition.

After a two-year spell in Australian Rules football, he switched to rugby union in 2013, winning the Wallabies player of the year award three times, before his career was derailed by his off-field conduct.

“We want to give Israel a new opportunity to shine on the pitch,” Catalans Dragons chairman Bernard Guasch said.

“We do not support or agree with Israel’s previously expressed and controversial views which are based upon his sincerely held religious belief. We do not share or condone those views and we are totally committed to our club and our sport being open and welcoming to everyone.

“We do not believe that those views should be publicly expressed, especially by a high-profile sports person. We have a signed agreement with the RFL. Any transgression will trigger an immediate termination of Israel’s contract and a substantial fine for the club.”

Folau’s signing comes just days before the start of the Super League season, with the Catalans beginning their campaign at home to the Huddersfield Giants on Saturday.