Home Culture Lakers trainer: “I was not supposed to outlive Kobe Bryant” 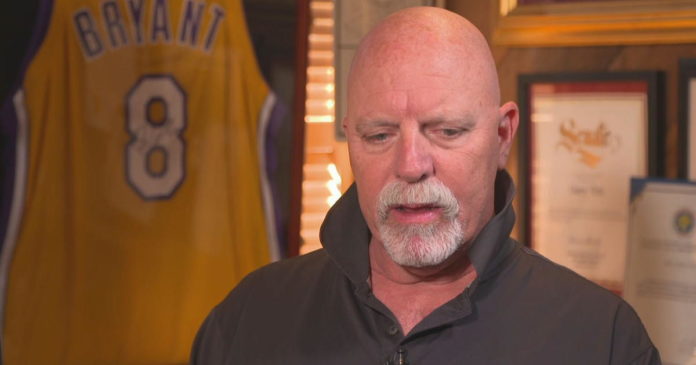 Throughout Kobe Bryant’s 20-season career, there was always one person by his side: Lakers head athletic trainer Gary Vitti. The two met when Bryant was 17 years old, entering the NBA out of high school in 1996.

“The joke was that I watched him grow up and he watched me grow old,” Vitti told “CBS This Morning Saturday” co-host Dana Jacobson. “I was not supposed to outlive Kobe Bryant.”

Bryant, his 13-year-old daughter Gianna and seven others died Sunday in a helicopter crash. They were one their way to a youth basketball tournament started by Bryant.

In his 32-year career as the Los Angeles Lakers’ head athletic trainer, Vitti was no stranger to working with legends, but he said Bryant was different than the rest.

“If you really look at Kobe from the perspective that an athletic trainer would, there’s nothing special about him,” he said. But asked what made Bryant great, he said, “He worked harder than anyone that I’ve ever been around.”

Vitti shared a letter to him from Bryant, reading, “To Gary: You are the best. Thank you for always having my back and showing me how to act like a pro. I love you and appreciate you more that you’ll ever know. Kobe Bryant.”

Vitti’s favorite memory with Bryant was during the 2000 NBA finals when the Lakers beat the Indiana Pacers.

“He really blew his ankle out,” Vitti said. “I’m mobilizing his foot, like moving bones around in his foot, and all of the sudden, he feels, and I feel, a pop … and I said, ‘This is either going to be really good or really bad.'”

Bryant went on to score 28 points in that game, and by the end of the series, he’d win the first of five NBA championships. Vitti was there for it all.

“As great as Kobe was on the basketball floor, I’m most proud of what he did off the floor. The way he loved his children,” he said. “He’s not going to see them grow up … this is truly a tragedy.”