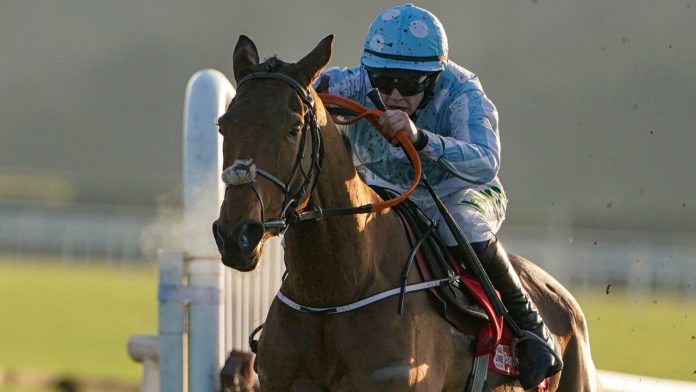 Honeysuckle will face a maximum of 10 rivals in the PCI Irish Champion Hurdle at Leopardstown.

Henry de Bromhead’s mare is unbeaten in six starts under Rules and produced a career-best performance to beat the boys in the Hatton’s Grace Hurdle at Fairyhouse on her latest appearance.

The six-year-old is a hot favourite to extend her winning sequence on Saturday at the Dublin Racing Festival, but is set to face a strong challenge when she drops to two miles and races left-handed for the first time since winning her sole point-to-point.

De Bromhead has a second string to his bow in Petit Mouchoir, winner of the 2017 Irish Champion Hurdle and runner-up to Sharjah over Christmas.

Elliott’s brilliant, unbeaten novice Envoi Allen was a notable absentee at Tuesday’s confirmation stage, having figured among the initial entries.

Mullins also retains a strong hand in the Ladbrokes Dublin Chase, with four of the eight horses confirmed hailing from his Closutton base.

Min has claimed the Grade One contest in each of the last two years, but appears unlikely to be the champion trainer’s first string – with Chacun Pour Soi a hot favourite to exact his revenge on De Bromhead’s A Plus Tard following their clash last month.

Paul Townend is expected to partner Chacun Pour Soi – and he is hopeful the eight-year-old can reverse that form.

“Chacun Pour Soi has been well since. I hope he can come on – he’ll have to come on a lot for Christmas,” said the champion jockey.

“We were disappointed he got beat – but taking the positives out of it, he gained more experience there and hopefully he can improve and get back to winning ways this weekend.

“It’s well highlighted that a lot of ours are (coming forward from their reappearances).

“Improving fitness-wise should put him bang there.”

Mullins may also saddle Cilaos Emery and Duc Des Genievres, while De Bromhead could let Ordinary World and Ornua join A Plus Tard.

The only potential runner not trained by either Mullins or De Bromhead is Pat Fahy’s Castlegrace Paddy.

It is a similar story in the ERSG Arkle Novice Chase, with Mullins able to choose from Bapaume, Cash Back, Melon and Royal Rendezvous to take on De Bromhead’s likely favourite Notebook.

The first of four Grade Ones on the afternoon is the Nathaniel Lacy And Partners Solicitors Novice Hurdle over two and three-quarter miles.

Envoi Allen is one of four possible runners for Elliott – along with Conflated, Easywork and Fury Road – while Mullins has confirmed Asterion Forlonge, Elixir D’Ainay and Janidil.

Latest Exhibition is a major contender for Paul Nolan.

The concluding Goffs Futures Stars INH Flat Race promises to be an informative affair, with Mullins’ Champion Bumper favourite Appreciate set to take on the hugely exciting Eric Bloodaxe from the O’Brien stable, among others.