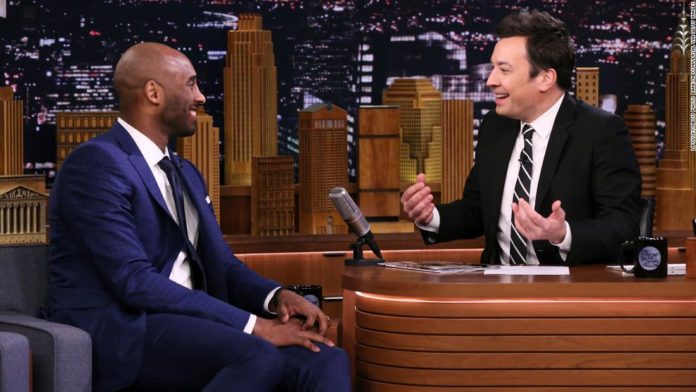 Bryant, his 13-year-old daughter Gianna, and seven other people were killed when the helicopter they were in crashed in Calabasas, California, Sunday morning.
Fallon posted the tribute video on Twitter with the caption, “I will remember you 24/8.”
“The world was heartbroken yesterday by a helicopter accident in Los Angeles that claimed the lives of nine people, including that of Kobe Bryant and his 13-year-old daughter Gianna,” Fallon says in the tribute video.
He goes on to describe meeting a 17-year-old Bryant at a party when he was 21. Both were new to Los Angeles and “hit it off” at the party.
When the host of the party asked if someone could go on a beer run, Bryant volunteered and Fallon joined him, he said.
They drove to a store that was locked and the man behind the door told the pair that he couldn’t sell to them because the store only delivered.
Bryant put his ID up to the window and told the worker, “I’m a Laker,” Fallon recalled fondly. They were able to get five cases and “saved the party,” Fallon said.
As Fallon told the story, he held back tears describing how he and Bryant would meet up and remember that story whenever they saw each other.
“When we’d run into each other over the years we’d laugh about that night that we first met,” Fallon said, pausing shortly to maintain his composure.
“We’d laugh about how much fun it is to raise kids and all the stupid mistakes we made trying to figure out how to be good dads,” the comedian recalled.
He encouraged everyone to honor Bryant and his daughter Gianna by following his example.
“Love your family, love your teammates and outwork everyone else in the gym,” he said.
Fallon ends by saying, “Kobe, when we meet again we’re going on a beer run.”