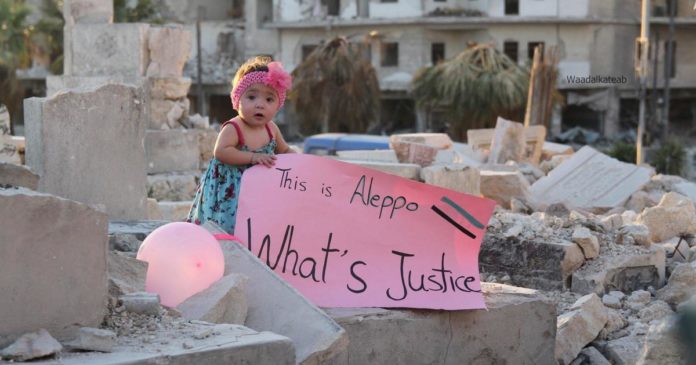 The Oscar-nominated documentary “For Sama” unfolds as a love letter from director and producer Waad al-Kateab to her daughter, Sama. The film juxtaposes moments of joy — as al-Kateab falls in love, gets married and has a child — with the brutality of living within rebel-held eastern Aleppo as the Syrian government and its allies launched non-stop assaults on the city’s residents.

Then still a university student, al-Kateab began filming in 2011 as peaceful pro-democracy protests first broke out on campus against the regime of President Bashar al-Assad.

“The first protest I ever joined, I couldn’t speak out. I couldn’t do anything. I was freezing in my place, just watching what’s happening,” al-Kateab told CBSN and “CBS Morning News” anchor Anne-Marie Green on the “CBS This Morning” podcast. “And, you know, the regime denied everything was happening and they were trying to destroy the will of the people: arresting people, beating a student and trying to say there was nothing. So it was our duty and our responsibility to carry any kind of evidence.”

Al-Kateab continued filming for the next five years as she and her husband, a doctor, decided to remain in Syria to battle for freedom and help run what became the last surviving hospital in eastern Aleppo. Al-Kateab says the birth of her daughter reinvigorated her activism, despite the escalating violence.

“Sometimes under the bad circumstances, the very hard and tough sound of the aircrafts, when I knew that I could be killed like after one minute, when I was living with Sama, looking at her face, all that fear was coming to my mind,” she said. “But at the same time, so many minutes I was just forgetting where I am and all the bad things. And I’m just happy because I have this baby. So I felt this is an experience that really changed the whole understanding for our suffering, for our struggle, for our fighting. Now, I know I’m not just fighting for myself or for the future or fighting for my country. I’m fighting for my baby.”

The siege ended in late 2016 when the Syrian government began to recapture Aleppo. Al-Kateab and her family, which now includes a second daughter, claimed asylum in England and now live in London.

“For Sama” has already won more than 50 awards worldwide — including prizes from Cannes and South by Southwest — in addition to earning al-Kateab and her and fellow director Edward Watts an Oscar nomination for Best Documentary Feature. But al-Kateab said it’s important to remember the film does not simply tell a story that ended once her family left Aleppo.

“We were lucky to survive when the same story is still happening right now. There are more than 3 million people who still have the same pain and the same suffering. And now, it’s worse. There’s a city called Idlib … and it’s being bombed every day. Every day we wake up [to] news like 20 people were killed. One family was killed. And I don’t know how long it will take the world to recognize that and realize that this should be the end.”

“I really wish everyone who sees the film understands that the refugee is not something that dropped from the sky. There’s a reason why these people became refugees. There’s a whole fight for them to not lose their country, to not lose their home and their dreams,” she said. “We really fought everything just to stay in our country and it just wasn’t allowed to us.”

Listen to Waad al-Kateab’s full interview on the “CBS This Morning” podcast to hear the lasting impact of the war on her daughter, Sama. Plus, al-Kateab shares her hope for the film to inspire women to stand up for what they believe in.