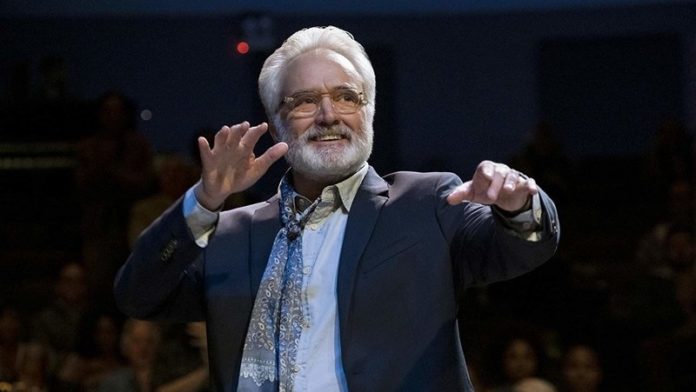 According to Variety, Emmy Award-winning actor Bradley Whitford (The West Wing) has been tapped to star opposite Oscar nominee Andrew Garfield in Lin-Manuel Miranda’s upcoming feature directorial debut tick, tick…BOOM! for Netflix. He is set to portray the role of Stephen Sondheim who is described as a Broadway kingpin. In addition to Whitford, Golden Globe and Emmy nominee Judith Light (Transparent) and Tony Award nominee Joshua Henry (The Scottsboro Boys) have also been cast for the roles of Rosa Stevens and Roger, respectively.

Based on Jonathan Larson’s (Rent) autobiographical Off-Broadway show of the same name, Garfield will play Jon in the musical. Jon, Jon, an aspiring theater composer who waits tables in New York City while writing Superbia, which he hopes will be the great American musical that will finally give him his big career break. The young man is feeling pressure from his girlfriend Susan, who is tired of continuing to put her life on hold for Jon’s career aspiration. Meanwhile, Jon’s best friend and roommate Michael has given up on his creative dream and has taken a high paying advertising job on Madison Avenue and is preparing to move out. As Jon approaches his 30th birthday, he is overcome with anxiety, wondering if his own impossible dream is worth the cost.

Larson posthumously won three Tony Awards for Rent, a show that enjoyed a dozen-year run to become the 11th longest-running show in Broadway history. When Miranda won his Pulitzer for Hamilton, he and Larson became two of only nine creators of stage musicals who won the Pulitzer Prize for Drama.