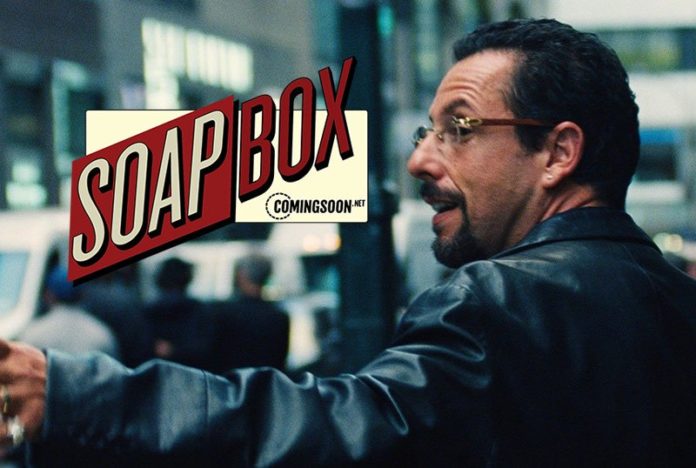 CS Soapbox: How Bad Should Adam Sandler’s Revenge Movie Be?

Thomas Edison and his team tested over 3,000 light bulb designs when trying to illuminate our world. Is that idea/quote derived from Nicholas Cage’s 2004 epic National Treasure? Yes, but that doesn’t make it anything less relevant to Adam Sandler.

Sandler’s game-changing performance last year in the Safdie brothers’ Uncut Gems has officially been ignored by all of the big awards ceremonies. Sandler’s depiction as a risk-taking, charismatic jeweler has been called “a tour de force” by many, however, that acclaim and subsequent Oscar buzz did not warrant the latter. Not only did Sandler not receive a Best Actor nods at the Golden Globes or the Academy Awards, but Uncut Gems itself has also been largely ignored. Not because it wasn’t Oscar-worthy, but because instead of making too many bad light bulbs, he made too many bad movies.

Uncut Gems doesn’t just show us his potential, it’s the amalgamation of all of his prior dramatic work. Unfortunately, the Academy (and whoever else assigns accolades) could not find it within themselves to overlook his inconsistent filmography— because that matters? For example, a member of the Academy did tell The New York Post that Sandler’s performance was “a tour de force…He’s emerging as a truly great actor, but then he does cheesy Netflix comedies that are really dumb.”

The snub of Sandler, who has finally cemented himself as a dramatic force to be reckoned with, comes after years of his own brand of trial and error. Sandler, who is mainly known for his comedic roles, has shown his dramatic chops before in films like Punch-Drunk Love (2002), Spanglish (2004), Reign Over Me (2007), Funny People (2009), and The Meyerowitz Stories (2017)—films that don’t fall under his usual brand. While an adept reflection of his potential, those performances have been drowned out by decades of lackluster comedic work (not that we don’t love him for his tenacity and relatability).

Sandler has been in Hollywood for a long time; maybe he saw all this coming. His foresight rubbed some voters the wrong way. Back in December, he said on Howard Stern’s radio show: “If I don’t get [a nomination], I’m going to f*cking come back and do [a movie] that is so bad on purpose, just to make you all pay. That’s how I get them.”

Sandler has been doing this for years. He doesn’t have to make a “good movie” to be successful. Billy Madison (1995) and Happy Gilmore (1996) — the movies that put him on the map — were solid comedies but not what people in the industry would call good films. Still, his movies made money. From The Waterboy (1998) to Grown Ups (2010), Sandler has consistently been able to produce his brand of movies, one that we all recognize: they contained (now) dated jokes, stereotypes, and almost always feature Peter Dante, Steve Buscemi, and Rob Schneider.

Similar to the argument that Scorsese made about how Marvel movies are “theme park rides” that take screen time away from smaller more independent projects, an argument can be made that Sandler’s films do the same. However, those same films have kept Sandler in the spotlight and given him the opportunity to branch out and fine-tune his dramatic chops.

What Sandler has done with Uncut Gems isn’t a comeback. Sandler has changed course. Hollywood may be filled with comeback stories, from Robert Downey Jr. and Marisa Tomei to Renée Zellweger and Eddie Murphy, but you don’t hear about a lot of Oscar-winning comedy-drama transitions. It has of course been done before but is arguably a more difficult thing to do (Murphy is the rare example of both). When everyone expects one thing of you, sometimes it’s just easier to stay in your lane.

Sandler didn’t stay in his lane. Full of fear, he went all out for Uncut Gems. In spite of previous films like Grown Ups 2 (2013) and The Do-Over (2016), no average moviegoer holds any ill will towards him (people watched those movies). He just seems like one of us up there, crafting 3,000 light bulbs with his team of usual suspects because he enjoys doing it. Now, it’s time for the finished product: a working light bulb— a manifesto of shit.

RELATED: Adam Sandler to make A24 debut with Uncut Gems

So how bad will Sandler’s revenge movie be? We hope it’s the worst: an obscene gesture directed towards the Oscar voters who thought he wasn’t ready for/deserving of a nomination. It should be worse than Jack and Jill (2011) and The Ridiculous 6 (2015) combined. Something so stereotypically “Sandman” that it makes those voters fearful; we will go see it and it will make money. That way, the next time Sandler goes all out in an A24 movie, he’ll get that nomination. 2022 will be the year Adam Sandler sits next to Nicholas Cage at the 94th Academy Awards for illuminating screens across the world (Cage for National Treasure 3, of course).