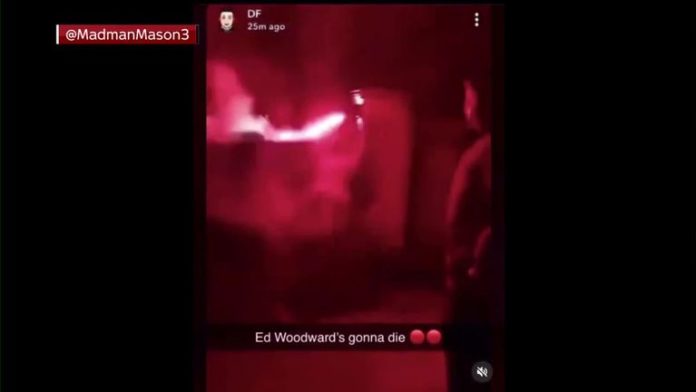 United confirm ‘attack’ on property in club statement: “Fans expressing opinion is one thing; criminal damage and intent to endanger life is another. There is simply no excuse for this”

Ed Woodward’s Cheshire home has been attacked by a mob of Manchester United fans.

A video emerged on social media on Tuesday evening of a group of hooded figures appearing to throw red flares over the gate of the United executive vice-chairman’s house.

United released the following statement regarding the incident: “Manchester United Football Club have tonight been made aware of the incident outside the home of one of our employees.

“We know that the football world will unite behind us as we work with Greater Manchester Police to identify the perpetrators of this unwarranted attack.

“Anybody found guilty of a criminal offence, or found to be trespassing on this property, will be banned for life by The Club and may face prosecution.

“Fans expressing opinion is one thing; criminal damage and intent to endanger life is another. There is simply no excuse for this.”

Neither Woodward, his wife or their two young children were present at the property during the time of the attack.

United’s hierarchy have come under increasing pressure following their disappointing season, with the club accumulating their worst points tally in the top-flight after 24 games in over 30 years.

United supporters are also planning a walkout during Saturday evening’s home game with Wolves, which is live on Sky Sports Premier League.

Speaking on The Debate on Sky Sports, Kevin Phillips and Graeme Le Saux voiced their outrage at the news that Woodward’s home was targeted United supporters…

Phillips: “At the end of the day, football is just a game. It should never spill over to being personal. It’s a game we all love, it is watched throughout the world and it makes you feel sick to hear that this has happened. It’s shocking.

“There’s a line and you don’t cross that line. It’s a sport and whatever is going on at United, or any club, you can’t just hold one person responsible – even if that person owns the football club – because there’s a board. They make joint decisions about whatever, so you can’t blame one person and go and attack their house. It’s just not ethically right, it’s wrong.”

Le Saux: “There’s no excuse for people behaving in this way. No matter what you think of somebody within a football club, whatever their job is, they are trying to do the best they can. There are lots of reasons as to why Manchester United aren’t performing consistently and you could argue that the structure of the club needs to modernise or change. There’s lots of debate about that but you can’t take it onto yourself and go and behave like that. It’s disgraceful.

“Football at its best is there to entertain, for people to enjoy and be passionate about, but there’s a line and everyone involved in football is constantly fighting about protecting what’s sacred. Unfortunately, a sport can’t be held responsible for the actions of either individuals or people’s behaviour when it becomes so volatile.”

‘This behaviour has crossed the line’

It is ironic that this incident occurred on a day that United took great strides in the January transfer market, says Sky Sports News’ North West reporter James Cooper…

“There is no doubt this is absolutely shocking. It’s good news that no members of the Woodward family were present at the property this evening and didn’t have to go through that.

“It was a mob of about 20 and reminds us of the bad old days at the start of the Glazers’ tenure, when similar gangs visited the houses of Manchester United figures including former defender Rio Ferdinand and former director Maurice Watkins.

“There is a frustration among United fans with the way things are at the moment but the club have been resolute in condemning the behaviour, making it clear that there will be sanctions following on from it.

“This has certainly crossed the line. There was revulsion and disgust at some of the chants in recent weeks and it hasn’t been pleasant.

“It is the minority of supporters but singing about “killing” or “burning” does not have a place in football and I think this event indicates an escalation of that.

“These are clearly not a true representation of United fans but it has happened, and it is ironic that this comes on the day where the club’s board has worked so hard to agree the long-awaited deal for Bruno Fernandes.”