Home Lifestyle Watching This Air Force Vet Learn His Rolex Daytona Is Worth $700,000... 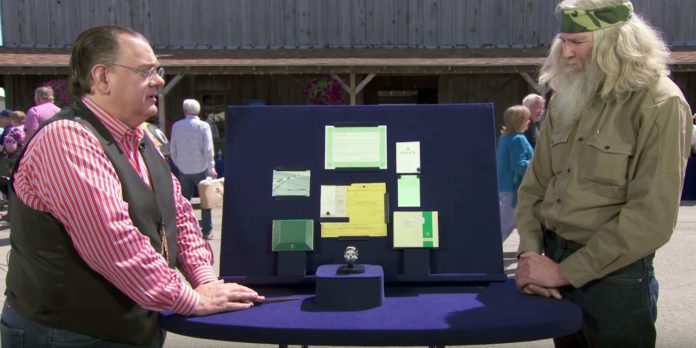 How’s your day going? Good? Great! I just discovered something that’ll make it even better. Because, honestly, how could you not smile a little when you watch a veteran who served during Vietnam discover that the watch he bought for $345.97 while he was in the Air Force is now worth $500,000 to $700,000 at auction? It’s great television!

This moment is brought to you by Antiques Roadshow, which, I gotta say, I haven’t been watching with the same amount of enthusiasm I brought to the table for Cheer. That might have to change, though. I mean, it’s fun-ish to watch an incredibly well-informed person explain why this particular Cracker Jack tin has value while that clearly haunted doll does not. But for someone who cares a whole lot more about grail-level watches than vintage snack containers and doll-hauntings, seeing the camera zoom in on a Rolex Daytona with a Panda Paul Newman dial triggers a very satisfying dopamine release.

Then you learn a little more about the Daytona in question. It was purchased (mail order!) through a military base exchange in 1974, and received in 1975, though according to its date stamp, it was made in the first quarter of 1971. And despite its age, it has never been worn, because its owner felt like it was too nice to beat up and then moved on to other watches. Over the last few decades, it’s been living in a safe deposit box, only brought out occasionally to be looked at. That is bonkers!

This Daytona also comes with pretty much every bit of authentication and paperwork one could ask for, plus the original box and outer box. Because it was never worn, there’s even a foil sticker still present on the case back, stamped with the reference number 6263. This is, by the way, considered the grail-iest of grails—the one that Paul Newman Daytona fans longingly pine for, even if it’s not the most authentic. (That’s ref. 6239, with a steel bezel and without the screw-down pushers that give the 6263 its “Oyster” designation.)

If you’re into watches, you’ll know that the folks filming knew they had something truly special on their hands. But the owner clearly didn’t. In fact, when expert Peter Planes of Luxe Auctioneers in Palm Beach, Florida, explained that “a watch like this, at auction, is worth about $400,000,” our long-haired vet dropped to the ground. He had to get back up for Planes to explain to him that, because it was unworn, his Rolex was more in the $500,000 to $700,000 range. The response, I’m deducing through the audio drop and the censor bar, was perfect: “You gotta be shitting me.”

Leslie Odom Jr. Is on the Crest of Fashion’s Next Wave at the 2021 Golden Globes