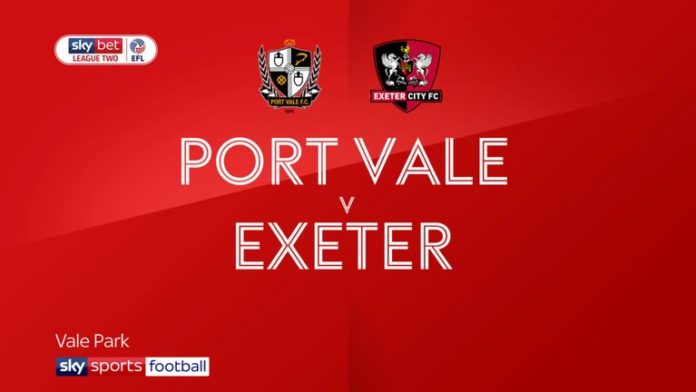 Ritchie Bennett scored twice as Port Vale came from behind to beat Exeter 3-1.

Nicky Ajose gave the Grecians the advantage but Bennett’s penalty fired the Valiants level after the break, before Leon Legge put Vale ahead and Bennett headed home his second.

Exeter took a deserved lead on 22 minutes when Brennan Dickenson’s cross evaded all except Ajose, who nodded past Scott Brown.

Bennett and Legge both headed over for the Valiants from set-pieces, but the hosts won a penalty when Dickenson clumsily challenged David Amoo and Bennett levelled from the spot.

Vale could have gone ahead when David Worrall slipped in Scott Burgess who blazed over from close range.

But the hosts went in front when Legge met Worrall’s cross and bundled home after the hour.

Substitute Randell Williams struck the outside of a post late on for Exeter who nearly grabbed one back.