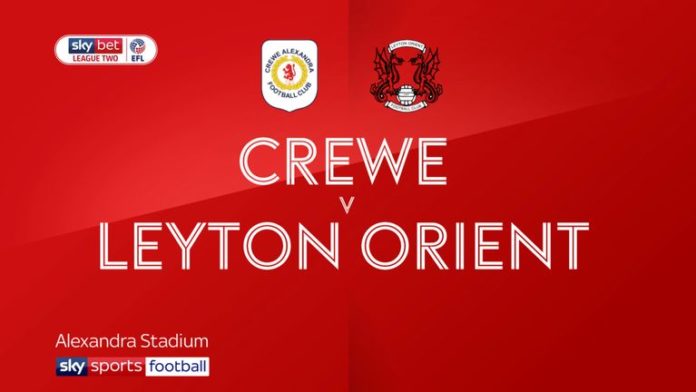 Charlie Kirk made the most of a goalkeeping calamity to help Crewe to a 2-0 win over Leyton Orient which moved them back into the top three of Sky Bet League Two.

Daniel Powell added a late second, but the Railwaymen were far from impressive for most of the Gresty Road encounter.

They were presented with a second-minute gift from Sam Sargeant with the O’s keeper slipping fielding a routine backpass allowing Kirk to nip and finish.

Orient carried a threat though and had enough chances to be back on level terms by the break.

Craig Clay went close with a flick-on which dropped the wrong side of the post, while Ruel Sotiriou turned a cross from James Brophy past the post.

Conor Wilkinson was left agonising over his finishing as he volleyed over after Will Jaaskelainen pushed out Sotiriou’s blast from 20 yards out.

Orient continued their momentum after the break and thought they had levelled when Sotiriou headed in, but Wilkinson’s push on a defender was spotted.

Crewe were tame in the final third, but midfielder Oli Finney went close when pulling a shot across the face of goal and Kirk had a curling effort chalked out for offside.

Then Powell charged in from the right and drove a fierce angled finish past Sargeant to kill the game.