Home Sport Kittle vs Kelce: Who is best TE in Super Bowl? 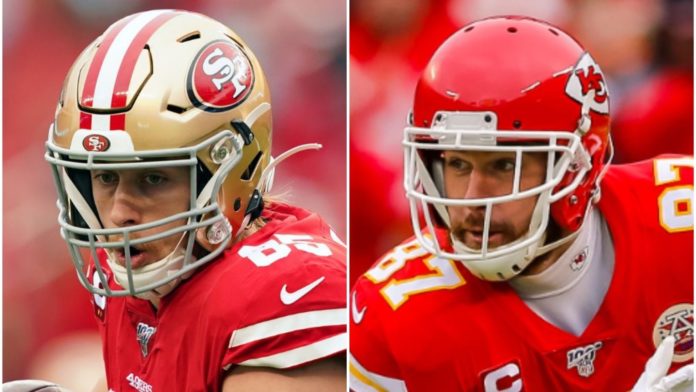 Saints tight end Jared Cook: “They get open on critical downs when there’s tight coverage. They block well, stretch the field. They encompass everything that you want in a tight end.”

Kittle is the new kid on the block, coming out of nowhere – as a fifth-round pick in 2017 – to explode on to the scene.

In 2018, he fell just four yards shy of breaking the NFL’s single-game record for yards by a tight end in a single game with a seven-catch, 210-yard performance against Denver in Week 13.

Then, in the final week of the regular season, he did indeed break the single-season receiving record for a tight end with 1,377. That record was set less than an hour after Kelce had broken the record himself with 1,336!

Kelce, meanwhile, has been Mr Consistent since breaking out in his second season in 2014. In 2019, he became both the first TE with four consecutive 1,000-yard seasons, and also the fastest player at the position to record 500 career catches.

Eleven-year veteran Cook, who has carved out an impressive career in the NFL, reached his first two Pro Bowls in his most recent two seasons, and at 6-foot-5, 250 pounds and as a player with great speed too, he offered his thoughts on the two players heading to Miami.

“I study most tight ends in the league,” Cook told Sky Sports after the Pro Bowl in Orlando. “And [these two] have big bodies. They run really well.

“They get open on critical downs when there’s tight coverage. They block well, stretch the field. They encompass everything that you want in a tight end.”

But Cook knows the raw talent alone isn’t enough to produce the numbers Kittle and Kelce do – they need support.

He said: “Both offenses, they create plays for both of their players.

“Both Kelce and Kittle are basically the main feature of those offenses to where they can put them at any position and they will still be successful.”

“How does a defender stop a player like them?”, we asked Cook. His response? “They can’t!”

Ultimately, we asked Cook which tight end he would pick if he had to choose one.

“I’m going to have to choose Kelce,” he said.

“I just feel like, in his offense, the way Andy Reid gets him the ball, it’s like… You don’t see Kittle catching a lot of shovel passes or quick screens behind the line and taking them and turning them up, or quick, little dump-offs and turning them up.

“I feel like Kelce is good at the line of scrimmage and extending.”

You can tune in to see both players on Sunday, February 2 from 10pm on Sky Sports Action.

@SkySportsNFL are in Miami all week – follow us for pictures, videos and a flavour of the madness.

For 90 minutes of Super Bowl LIV build-up from Hard Rock Stadium with Rob Ryan and Josh Norman, join us on Action, Main Event and Mix from 10pm on Sunday, February 2.