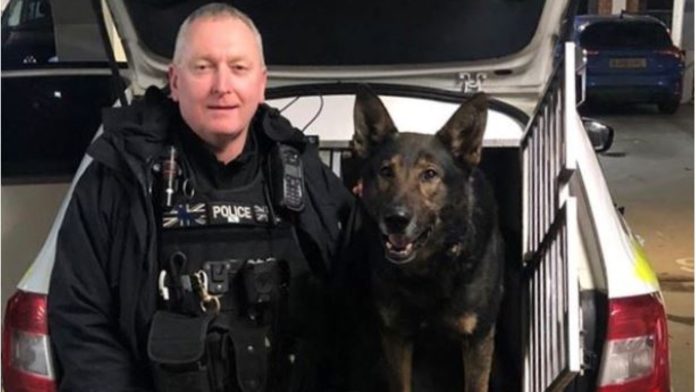 A police dog sniffed out a lost wedding ring after its owner threw it away following a row with his wife.

PD Odin, a six-year-old German shepherd, came to the rescue after PC Carol Woodall spotted a man and his friend acting suspiciously with a torch on a road in Harbourne, Birmingham, at 2am on Saturday.

The officer pulled over to find out what the men were doing and they told him about the lost ring.

In less than two minutes of sniffing, Odin found the ring, much to the relief of the husband.

PC Woodall, said: “Apparently the man pulled the ring off and threw it in a momentary loss of temper… but very quickly regretted his actions and was desperate to find it.

“Our dogs are trained to sniff out human scent. The men said they’d been looking for quite some time and the ring was quite small, so I wasn’t confident there’d be enough scent for Odin.”

He added that Odin, who is a product of the force’s police dog breeding and training scheme, proved him wrong by finding the ring so quickly in the dark.

“Odin got a pat and thanks all round. It’s nice to be nice and I was back on patrol in less than five minutes,” PC Woodall said.