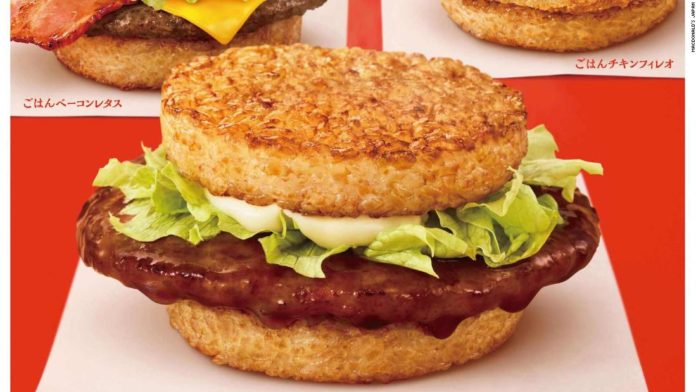 The rice burger bun, or “gohan” burger in Japanese, arrives February 5 and “offers a new taste by changing the bun into a specially made rice bun while keeping the ingredients and seasoning of the classic burger,” according to McDonald’s Japan.
The buns are made from homegrown rice and are glazed with a savory soy sauce that McDonald’s says will allow consumers to “enjoy the usual burger taste while enjoying the exquisite harmony of a new flavor stemming from an unexpected combination.”
The burger will come in three varieties: rice teriyaki, rice bacon lettuce and rice fried chicken. They will be sold nationwide for a limited time as part of a “Night Mac” menu that’s available between 5 p.m. and closing.

Ahead of its launch, McDonald’s Japan fired off a cryptic tweet that caused a stir among Twitter users.
“Ahhh … I really wanna eat rice,” the company tweeted Saturday. That message has already racked up over 233,000 likes and 56,000 retweets.
Some social media users predicted the arrival of the rice burger bun and thanked McDonald’s. A few Japanese rice farms offered to become McDonald’s suppliers. Others hoped for the return of a curry, rice and fried pork cutlet dish that graced McDonald’s Japanese lunch menus in the 1990s.
“The reaction was huge. People didn’t know there was going to be a new product so it created a lot of suspense. Everyone had a lot of hope for what it would be,” Kokoro Toyama, McDonald’s Japan rice burger representative, told CNN Business.
Toyama said the decision to launch the rice burger bun was based on customer feedback and on market research that showed that people in Japan in their 30s and 40s preferred rice over bread for dinner, while still being fond of the staple teriyaki and fried chicken burgers they’d eaten as teenagers and young adults.
Even the advertising campaign slogan “gohan dekita you,” which can mean both “dinner is ready” and “the rice is ready” in Japanese, was created with a specific emotional appeal to hungry diners.
“It’s a nostalgic phrase that sounds familiar and makes people feel like they are at home,” Tomoya said. “It’s like your mom telling you your dinner is ready.”

Not the only rice burger bun on the market

McDonald’s (MCD) is not alone in cashing in on the emerging rice burger bun market. The company’s announcement follows MOS Burger, a rival Japanese chain that has sold rice patty bun burgers for decades. MOS Burger invented its rice burger bun in 1987 and claims it is the world’s first.
The company created that product to make “full use of a staple food in Japan,” Masakatsu Kido from MOS Burger’s International support division, told CNN Business, who added that the rice burger bun “is now recognized as an undeniable hit.”
As McDonald’s teased its new rice burger bun, some Twitter users also pointed out that MOS Burgers already sold such a product and suggested that McDonald’s Japan was late to the scene.
McDonald’s announcement, though, shows how international brands shape their products to fit the tastes of a local market — in this case, a Japanese consumer base that may crave rice instead of buns with their burgers.
“We had more and more customers saying they wanted to eat rice for dinner, not bread, and that’s why we wanted them to enjoy the McDonald’s rice burger,” said Toyama.