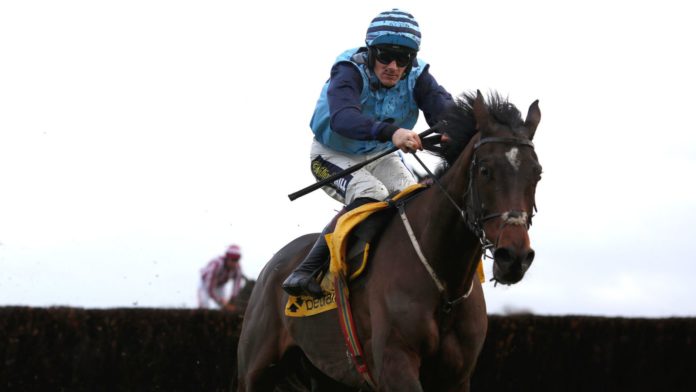 Riders Onthe Storm is on course to take on Cyrname in the Betfair Ascot Chase on February 15.

Since joining Nigel Twiston-Davies from Tom Taaffe’s yard, the seven-year-old has won both of his races in comfortable style.

He was supposed to run in the Caspian Caviar Gold Cup at Cheltenham in December, but was taken out in error and ran at Ascot a week later in a Graduation Chase, beating On The Blind Side by seven lengths.

“Riders Onthe Storm is on target to run in the Betfair Ascot Chase on February 15. He has come out of Ascot very well and was impressive there last time,” said Twiston-Davies.

“He likes the track and the Ryanair Chase at the Cheltenham Festival is the long-term aim.”

Riders On the Storm is part-owned by Carl Hinchy, who added: “Riders Onthe Storm is in good form and the plan is for him to run in the Ascot Chase.

“This race has been the target since his win at Ascot last time out and it fits in nicely in terms of the Ryanair Chase at the Cheltenham Festival, which is where he will go next after this.

“Nigel is happy with him and he’s in great nick so hopefully he can run well.”

Cyrname is on something of a retrieval mission after a below-par effort in the King George VI Chase behind stablemate Clan Des Obeaux.

He did, however, win the race in devastating style last year and was the first horse to lower Altior’s colours over fences earlier this season.

Nicky Henderson has entered Top Notch and Janika with Saint Calvados, Traffic Fluide and Valdez also in the mix.

Jessica Harrington’s 2017 Gold Cup hero Sizing John, who is due to run at Leopardstown this weekend, is an interesting entry from Ireland.