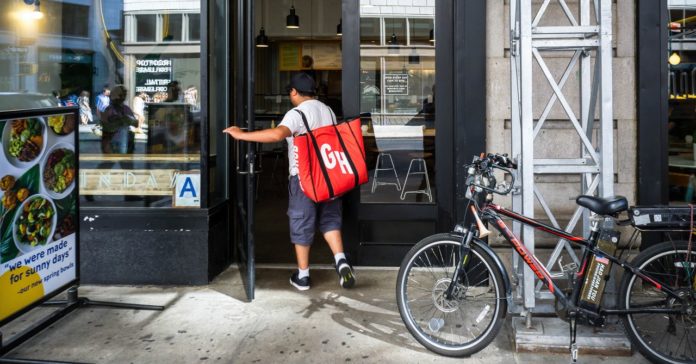 In cases where an order isn’t completed, Grubhub says it refunds the order and compensates the delivery worker for their time. But restaurant owners have expressed concern about potential reputational damage if the restaurant is seen as cancelling delivery orders—all the more so if it doesn’t even know those customers exist.

Kin Khao was far from alone in that position. Other San Francisco restaurateurs, including the owners of Third Cousin and Deli Board, were dismayed to find Grubhub pages they hadn’t requested. Elsewhere, restaurants have been complaining for months. At Hathorne, a new American restaurant in Nashville, Tennessee, chef and owner John Stephenson had received mysterious calls about delivery for weeks, asking for things like an extra gallon of iced tea with an order.

Stephenson couldn’t fulfill their request, he told them, because Hathorne doesn’t offer delivery for any of its dishes, which include venison short ribs and crispy redfish. “We don’t feel like it showcases what we do best,” he says.

When Stephenson asked to have Hathorne removed, he says he was bounced between customer service for Grubhub and Yelp, which partners with Grubhub to fulfill deliveries requested on its website. As of Monday, the restaurant had been removed from Grubhub, but was still live on Yelp with an out-of-date menu and a $5.99 delivery fee. Stephenson suspects the delivery workers have been using a loophole at the restaurant, which is to order takeout at the bar. Last week, feeling he had exhausted other options, he took to Twitter to complain.

On Monday, Yelp told WIRED it has requested that Grubhub remove all “non-partner” restaurants from Yelp pages.

In 2015, DoorDash was sued by California burger chain In-N-Out for delivering food without its permission, noting lack of control over delivery timing and safety. The lawsuit was later dismissed. Last year, two Chicago restaurants, one selling burgers and the other sushi, sued DoorDash again for similar practices, alleging trademark infringement and deceptive trade practices, and sought class action status for other “non-partner” restaurants. The case settled this fall.

In tweets, Techamuanvivit has expressed doubts that the listings are mere coincidence, and has repeatedly said she intends to sue. Reached by phone on the floor of Kin Khao, she tells WIRED that she and her lawyers need to continue investigating the situation before coming to any conclusions. “They messed with the wrong Thai restaurant,” she says.

Compared with big restaurant chains, independent restaurants like Hathorne and Kin Khao are at a disadvantage when trying to control their online identity, says Alexandra Mateescu, a researcher at Data and Society. “Who has control can make or break a small business,” she says, pointing to lawsuits from small businesses over things like incorrect information on Google Maps and inaccurate reviews.

There are lots of reasons why restaurants seek to avoid the delivery companies, she notes, from their philosophy about dining to the economic pressures involved. The delivery industry has put a crunch on many restaurants, with high fees that cut into thin margins and disruptions to how they do business by shifting time and effort away from dine-in customers to juggling deliveries. Those forces, ironically, are the same ones that have spurred the proliferation of ghost kitchens like Happy Khao, which do away with much of the overhead to focus solely on delivery services. They are, in many ways, a venture-backed answer to the delivery companies the VCs helped create.

Grubhub says that it’s just trying to keep up with the competition. While the food delivery industry has grown fast, it’s facing existential issues, with low margins and legal challenges to its labor model, which largely relies on contractors. DoorDash and Postmates, which have won a growing share of the food delivery business, have long listed restaurants without contracts. When Grubhub announced its initiative in October, along with a quarterly loss that sent the company’s stock down 40 percent, the company told Eater the “non-partnered” arrangement was not ideal, but necessary to help prop up customer loyalty. “The non-partnered model is no doubt a bad experience for diners, drivers and restaurants,” the company said. Analysts expect Grubhub losses to continue when the company announces fourth quarter results next week.