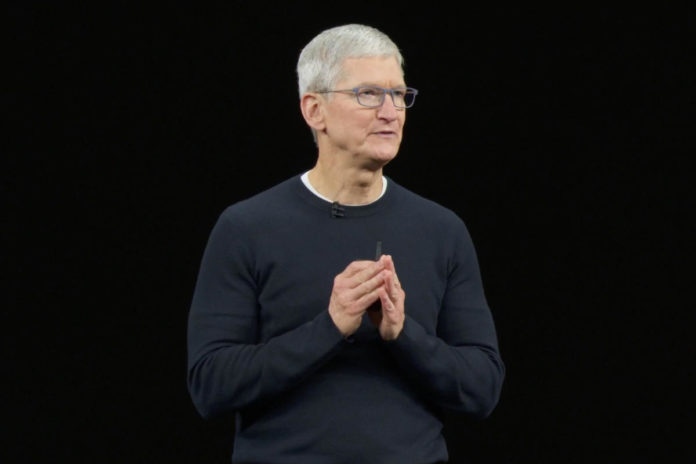 Well, here we are again. Apple once again announced its biggest financial quarter of all-time on Tuesday. During the three months that ended calendar 2019, Apple generated a staggering $91.8 billion in revenue, up from the previous record of $88.3 billion generated at the end of calendar-year 2017. The company also generated a record $22.2 billion in profit. Sometime this decade, Apple’s going to drop a $100 billion holiday quarter on us, and I’m not sure my brain can count that high.

In any event, after dunking on us all via press release, it was time for Apple’s executives to do their quarterly ritual of spending an hour on the phone with a handful of questioning financial-industry analysts and a bunch of silent journalists. There’s always something interesting to glean from that call, especially when Apple CEO Tim Cook and CFO Luca Maestri show restraint and don’t just spend an hour running around the conference room high-fiving.

Four years ago Apple announced it was going to start replacing the explosive growth once generated by the iPhone with a new source of growth: its Services accounting line. The goal was to double its Services revenue by 2020, and it’s basically reached that goal as of this quarter.

This quarter, Services generated $12.7 billion in revenue and grew 17 percent from the year-ago quarter. (It’s been a staggering run of growth; Services has been growing by double digits every single quarter since 2015.) It now accounts for 14 percent of Apple’s business, more than any other product line. It’s twice the size of the iPad and almost twice the size of the Mac.

That’s a huge change in the composition of Apple’s business, purely by revenue. But it misses an important multiplier: profit. As reported by Maestri on Tuesday, Apple’s gross margin on products was 34.2 percent. Its gross margin on services was 64.4 percent. That’s right, Apple’s Services business has nearly twice the gross margin of products.

In other words, every dollar of Services revenue generates nearly twice the profit of product revenue. Apple’s product margins are really good, but its Services margins are spectacular. This is more than growing revenue—it’s growing revenue in an incredibly profitable segment.

Apple launched its Apple TV+ service during the quarter, meaning that it’s not a major contributor to the results this time out. In fact, Maestri went so far as to refer to it as “immaterial to our results.” But he did offer a little bit of clarity about how Apple will be accounting for Apple TV+ revenue in the future.

Apple is accounting for the money from those subscribers by taking a certain amount of money out of their hardware purchases, transferring it to the Services revenue line, and spreading it out over the entire free year period. The challenge is that it has to estimate how many people will be taking advantage of the offer, which requires a little math.

“You need to keep in mind that from our total eligible device sales, you need to make a number of reductions for family sharing, for multiple device purchases and for geographic availability,” Marstri said. In other words, if a family bought five new Apple devices, they’re still a single Apple TV+ subscription. Some countries don’t have Apple TV+ availability, and others may be less inclined to sign up because most of the content was made in English and is dubbed or subtitled for their local language. To top it all off, to sign up for Apple TV+ you have to give Apple a credit card—and agree to be charged in a year unless you cancel. That all factors into Apple’s guesses about how many people will take advantage of the offer, something that Apple will review and revise as the offer continues.

We probably won’t know how well Apple TV+ is doing for Apple for another year, when the company will get a better idea about how many of these “free” subscribers convert to become paying ones.

Also, good news for people who were worried that Apple TV+ might end up with a lower-cost tier that’s stuffed with advertising: Cook said that “we feel strongly that what that customer wants is an ad free product.” Amen.

Tim Cook sounded a little under the weather on Tuesday. He spoke in a subdued tone, cleared his throat, sniffled, and sounded like he was speaking around some sort of lozenge or cough drop. But even when ill, Tim Cook is a wily fellow who can’t be tricked into disclosing future Apple product directions, even by wily financial analysts who have found increasingly clever ways to phrase questions in the hopes that Tim will reveal something about Apple’s future product pipeline.

“Tim, at some point in the future, Apple will launch a 5G iPhone,” said Katy Huberty of Morgan Stanley. “How big of a demand driver do you view 5G capability in a handset, and what’s your view as to what the killer app will be from a consumer perspective?” Yes, Tim, let’s talk about your 5G iPhone and what will make it sell!

“You know, we don’t comment on future products, and so I try to sidestep a bit,” Tim replied. “With respect to 5G, I think we’re in the early innings of its deployment on a global basis. We obviously couldn’t be prouder of our line-up and are very excited about our pipeline as well and wouldn’t trade our position for anybody.”

Not to be denied, analyst Krish Shankar of Callan and Company decided to spin Huberty’s question in a slightly different direction. “Tim, I just wanted to pick your brain a little bit on the overall smartphone market,” he began, appealing to Cook’s professorly nature, perhaps. “There’s a general view that when 5G phones come out they are going to be more expensive due to higher component costs. But at the same time, it looks like you guys have proven that there is a market for low-cost geographies, with phones like iPhone SE. So how do you see these two different segments within the smartphone market evolving over the next one to three years?”

“Again, I want to stay away from commenting about the future products,” Cook replied. Nice try, Shankar! “In terms of the price, I wouldn’t want to comment on the price of handsets that aren’t announced,” Cook concluded, and a little stifled laugh wafted out across the conference call line.

Finally, analyst Sumit Chatterjee of JP Morgan took another run at getting Cook to look deeper into 2020. “Based on the velocity of momentum you’re seeing for the products exiting the quarter, how comfortable are you feeling about sustaining growth in iPhone revenues through the year?” he asked.

Cook is like a wizard. He arrives precisely when he means to.