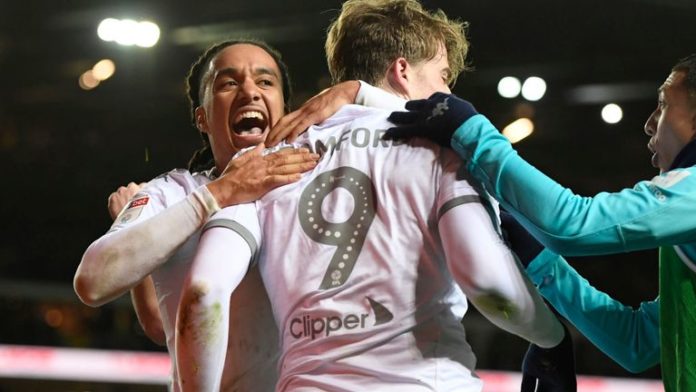 Leeds, winless in three before facing Millwall, found themselves 2-0 down inside 23 minutes after Shaun Hutchinson’s headed goal and Jed Wallace’s penalty.

A Pablo Hernandez goal either side of a Patrick Bamford double secured all three points for Leeds which saw them replace West Brom at the top of the Championship after their 2-1 defeat to Cardiff City.

“Leeds were not on a good run of form. They have not been playing particularly well, results have not been great but you are going to go through times like that in a season.

“You’re going to go through good spells and bad spells. It is how long these bad spells last and they were playing against a very, very difficult Millwall side under Gary Rowett. They are a completely different proposition, they have been winning games, picking up points. They were the in-form team in the Championship.”

‘Importance of win cannot be underestimated’

Robinson says the magnitude of Tuesday’s win cannot be underestimated especially after Bielsa’s side surrendered an automatic promotion place in the Championship and were knocked out of the play-offs at the semi-final stage.

“They did fade away but in my opinion it was not because of that. They were still overpowering teams but were just not putting away their chances. This year has been the exactly the same.

“The way that they started the game you questioned why they were sloppy in possession and they conceded early goals but it was a huge turn around especially with West Brom’s dip of form.

“That was a huge result for Leeds last night and it cannot be underestimated.”

‘Leeds have to go up’

“There has been a bit of unrest and nervousness around Elland Road because Leeds have to go up this season. This is the season that club is geared to go up,” he continued.

“The expectations at that club are phenomenal. The away support that Leeds take to games is immense and with that comes expectation. The price of getting out the championship is huge.