Home Lifestyle I Love Pasta More Than Anyone, But I’ve Discovered That Polenta Is... 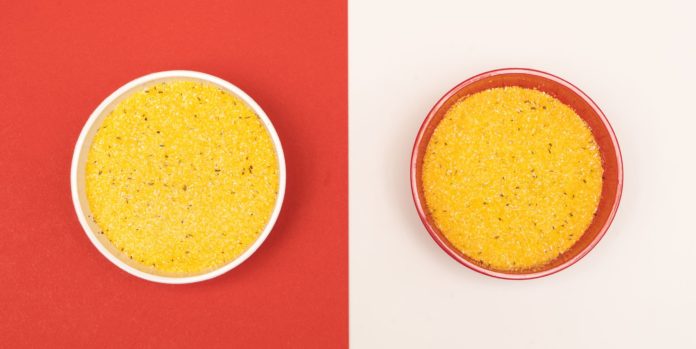 You’re a little laughing baby covered in spaghetti and marinara sauce. There’s a meatball in your hair, noodles stuck to your cheeks, and blotches of crushed tomatoes all over your bare chest. Whoever you are, whatever your background is, you’ve probably got an old picture that looks like this, because Americans love pasta. Hell, we’ve even got an emoji for it ?. A national poll found that 59 percent of our population eats pasta at least once a week. In my house, we ate a lot more pasta than that. We even had our own names for it. Orrichiette were “hats,” farfalle were “bowties,” and radiatore were, of course, “radiators.”

But despite its reputation for being easy to cook, making a good plate of macaroni is tough. The amount of salt in the water has to be just right. It can’t cook too much, but it’s still got to cook in the sauce enough so it doesn’t turn out dry. Noodles require stirring so they don’t become a goopy fist when you strain them out. And sometimes, when you follow all the rules, the pasta still gets soft. Even if you manage to cook it perfectly al dente, all that processed flour—especially the refined shit that’s most common on shelves—isn’t good for you at all. Unless you’re buying the healthier whole grain stuff, pasta is heavy on carbs and low on pretty much anything nutritious. It’s hard to digest, has been linked to depression, and if you’ve got a gluten sensitivity, forget about it.

It’s hard for me to say this—especially since strands of spaghetti might as well be holding together the proteins of my DNA—but pasta is nowhere near as dependable as its lesser-known Italian counterpart, polenta. You know, that yellowy porridge that’s almost like Italian oatmeal or Southern grits. Polenta can do anything pasta does, and you never have to worry about it being too mushy. No such thing! Polenta doesn’t draw attention to itself, because unlike pasta, it’s never bad.

I’m sure you’ve eaten polenta before; you just might not remember it. It’s that menu item at Italian restaurants that’s always tucked away inconspicuously, around the risotto. If you’re Italian you might have had it beneath a mound of salty baccala on Christmas Eve or at your grandma’s house baked in a deep oven sheet with a lot of olive oil. Maybe you ordered brunch one time at an Italian place and ended up with some gooey eggs on polenta.

I have recently discovered that the ground maize can be made hard or soft, sweet or savory, and that it works as a base for almost anything. Best of all, whether it’s boiled like oatmeal or baked like cornbread, I can always count on the yellow roughage to go down easy. Even for the most gluten sensitive among us, digestive issues are not a worry. It’s just corn!

Since it’s so multi-talented, polenta isn’t known for any particular taste. I like it soft, creamy, buttery, with extra cheese. I cook it in a deep pot (non-stick) so it doesn’t spurt all over my stove top. A little salt in the water, a liberal spoonful of butter, and repeated stirs. Once it starts to settle, I add some cheese. A lot of cheese. Pecorino or parmigiano is my favorite. But hey, you could even use cheddar. It’s just polenta. Pasta snobs can’t say a word about how you eat it.

What makes most pasta dishes great, of course, is the sauce. And whether you’re doing bolognese or frutti di mare, you can always count on polenta as a base that won’t end up too soft or stuck together in a clump. Have a Sunday red sauce tradition? Great. Serve it on top of polenta. You’ll thank me on Monday.

Unlike pasta, polenta is never bad.

Like many of Italy’s best culinary offerings, polenta is a peasant dish. While most of the Italian foods that we know and love hail from Southern Italian people who carried their culture to America in search of better lives, polenta is actually tied more to Northern Italy. It was affordable and versatile, and easy to grow on the north side of the Peninsula. Peasant families ate it so much that they developed a nutritional deficiency called “pellagra” due to their over-dependence on it. I will not go quite that far with my newfound polenta habits.

Look, I’m not telling you to eat polenta for every meal. We all know that humans don’t process corn—that shit just goes right through us. But nobody’s eating spaghetti for its nutritional value. A big plate of starchy wheat isn’t exactly a dietitian’s dream. True, humans can at least digest pasta. But if your intestines are anything like mine, a corn-based meal is going to be a lot lighter on the tummy.

Polenta cooks easy. No more setting timers or rushing up from the laundry room to take the pasta out on time. Just add some water and stir. It’s forgiving. It lasts long as leftovers. It’s cheap as hell. And it might as well be god’s original Metamucil.

I’m not afraid to say it. Polenta is better than pasta.

Dom Nero Dom Nero is a staff video editor at Esquire, where he also writes about film, comedy, and video games.

How To Get Rid of Back Acne For Good, According to an Expert

Travis Scott and Dior Collaborated on a Full Menswear Collection

My Disability Is My Superpower. If Only Employers Could See It That Way.

The Beautifully Flavorful Gin That Isn’t a Juniper Bomb