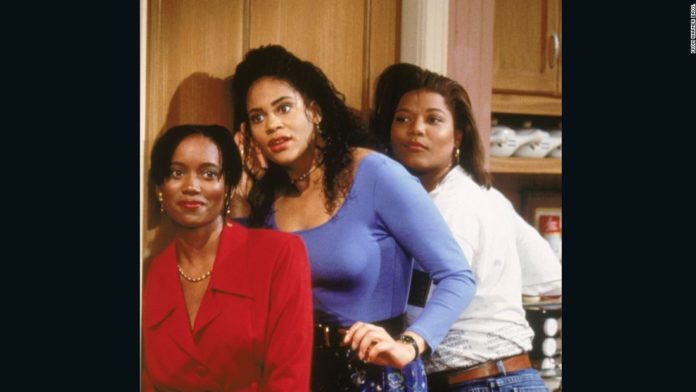 In an interview with The Guardian, the actor talked about being “very aware of my privilege as a heterosexual white male.”
He also discussed his hit NBC series, “Friends,” existing in a “pre-woke” time — before there was as much attention to inclusive storytelling as there is now.
“Maybe there should be an all-black ‘Friends’ or an all-Asian ‘Friends,'” said Schwimmer, who played Ross for 10 seasons. “But I was well aware of the lack of diversity and I campaigned for years to have Ross date women of colour. One of the first girlfriends I had on the show was an Asian-American woman, and later I dated African-American women. That was a very conscious push on my part.”
Except … there was an all-black version of “Friends” that predated Schwimmer’s series by a year.
The Fox comedy “Living Single” aired from 1993 to 1998 and, like “Friends,” focused on six young adults and their intertwined lives in New York City.
“Living Single” was created by Yvette Lee Bowser and starred Queen Latifah, Kim Fields, Erika Alexander, Kim Coles, John Henton and T.C. Carson.
The Internet was quick to remind Schwimmer about that series, with Alexander, who starred as attorney Maxine Shaw, weighing in.
She tweeted a link to an article about her discussing the differences between the successes of the two shows and called on her costars to “Help me school [Schwimmer].”
People were also quick to grab hold of Queen Latifah connecting the two sitcoms in a 2017 appearance on “Watch What Happens Live with Andy Cohen.”
“It was one of those things where it was a guy called Warren Littlefield that used to run NBC, and they asked him when all the new shows came out, they said, ‘If there’s any show you could have, which one would it be?’ And he said, ‘Living Single.’ And then he created ‘Friends,’ ” she said.
“Apparently, Schwimmer has no idea he was on a white reboot of ‘Living Single,’ ” writer Michael Harriot tweeted.
Wednesday Schwimmer tweeted a response some of the criticism.
“I didn’t mean to imply Living Single hadn’t existed or indeed hadn’t come before Friends, which I knew it had,” Schwimmer tweeted in a statement. “Please remember in an interview quotes are often pieced together and taken out of context, and then these quotes are repurposed in other articles by other people who are trying to be provocative.”
He also said he “was a fan of Living Single, and was not implying Friends was the first of its kind.”