The story of the First Americans — who they were, and when and how they dispersed across the New World — remains one of the most debated chapters in the human story.

Archaeologists, geologists and geneticists, among others, have weighed in with different scenarios. But, so far, only one thing is certain: We’ve got a lot left to learn.

“Talking about the settlement of the Americas is like building a 1,000-piece jigsaw puzzle with only about 20 pieces,” says Ohio State University anthropologist Mark Hubbe. “Which means we need to pick up crayons and make our own drawings to complete the gaps between pieces.”

Hubbe and colleagues analyzed four of the oldest human skulls found in North America, collected from 2008 to 2015 from underwater caves and sinkholes in the Mexican state of Quintana Roo, just a few miles from popular tourist sites such as the Mayan ruins of Tulum.

The team’s analysis of the skulls, which date from about 8,500 to 13,500 years old, adds new complexity to the long-running First Americans debate.

“What we are doing with adding this new piece is not changing the pieces we know, but forcing us to consider other ways we could draw the background to fill in the gaps,” says Hubbe.

That’s because, unlike in his previous research on early South Americans, Hubbe documented unusually broad variation between the North American skulls. Simply put, if the First Americans represent a single population, you’d expect them to look like it.

In fact, comparing the skulls with modern populations, the research team found that one most closely resembled people living in the North American Arctic, while another was most similar to modern Europeans. The other two skulls each had a different mix of features typical of Asian, Native American, South American or Arctic populations.

Setting Foot In A New World

To understand what the four skulls’ variation shows — and what it doesn’t — let’s first revisit the debate itself.

For much of the 20th century, researchers generally believed that the First Americans arrived from Siberia, via the Beringia land bridge, about 13,500 years ago, as ice sheets retreated and opened up a land corridor into the New World.

Heaps of more recent archaeological research, however, have muddied that tidy, linear narrative. Archaeological finds — from southern Chile to Idaho, Florida to British Columbia — have shown that humans were in the Americas thousands of years earlier, well before the ice sheets melted and made overland travel possible.

An increasing number of researchers believe that people in northern East Asia may have followed the Pacific coast, eastward to North America and then south, all the way to Chile. Even with glaciers meeting the sea across northern stretches of this “kelp highway,” the explorers would have found ample marine resources to sustain them, no land needed. Unfortunately, most if not all archaeological evidence that might confirm this hypothesis is, thanks to rising sea levels, now submerged.

Geneticists, meanwhile, working with both modern and ancient DNA, have confirmed that the First Americans descended from East Siberian populations, consistent with the overland Beringia hypothesis — though they have also uncovered evidence of multiple waves of migration over millennia, at least some potentially by following the Pacific coast.

Other ideas persist in popular culture despite a lack of rigorous science to support them, such as people boating from Europe, or directly across the Pacific, island-hopping via Polynesia.

Adding to the tangle of theories and ideas about the First Americans: The oldest New World residents didn’t look like modern Native Americans. To be clear, we’re talking morphology — the study of form, such as an individual’s facial features as determined by skull structure — rather than genetics.

Washington State’s Kennewick Man, for example, has been said to resemble populations as disparate as modern Europeans and ancient, indigenous Japanese — even though the nearly 9,000-year-old skeleton’s DNA firmly links him to modern Native Americans.

Understanding what First Americans looked like — and why they looked different than modern Native Americans — is confounded by a North-South divide. South America is rich in the remains of ancient peoples; North America, not so much.

Most of Hubbe’s earlier research focused on Brazil’s Lagoa Santa region, where hundreds of ancient remains have been found, compared with fewer than two dozen in all of North America.

“What we see is [ancient] South America is a relatively homogeneous population that does not resemble modern Native South Americans,” says Hubbe. “We have frequently assumed that Lagoa Santa represented a good picture of all early Americans (both North and South).”

In other words, researchers believed, based on available evidence that was largely from South America, that the earliest Americans generally looked like each other. Only over time, for undetermined reasons, did their facial features evolve into those of modern Native American populations.

“The study of the Quintana Roo material shows that this was not the case,” Hubbe says. “South and North America have very different histories and these are also reflected in the biological diversity of early Americans.”

This unexpected degree of variation among the four Quintana Roo skulls is, again, strictly morphological. It’s not time to dust off discredited theories such as the Solutrean Hypothesis, which championed the unsupported idea that the first people to reach the Americas were European.

As Hubbe puts it: “Our results do not question the origins of Native Americans, as all the available genetic studies so far demonstrate that Native Americans derive from Asian populations. But they do show that early North American populations were much more diverse-looking than current Native American groups, which brings up the question of what happened to this diversity over time. In other words, our results don’t really speak to the origins of Americans, but to what happened to these groups once they got here.”

Exactly why early Americans lost this diversity remains unknown, though it happened as populations spread across a mass of land that stretches from the Arctic to the subantarctic. Groups would have become isolated for periods, intermixed with other groups, evolved distinct cultures and adapted to a wide range of environments and climates, all of which may have shaped individuals’ appearances.

One thing the Quintana Roo skulls make clear is how many puzzle pieces in the story of the First Americans have yet to be found.

The research appears in PLOS ONE. 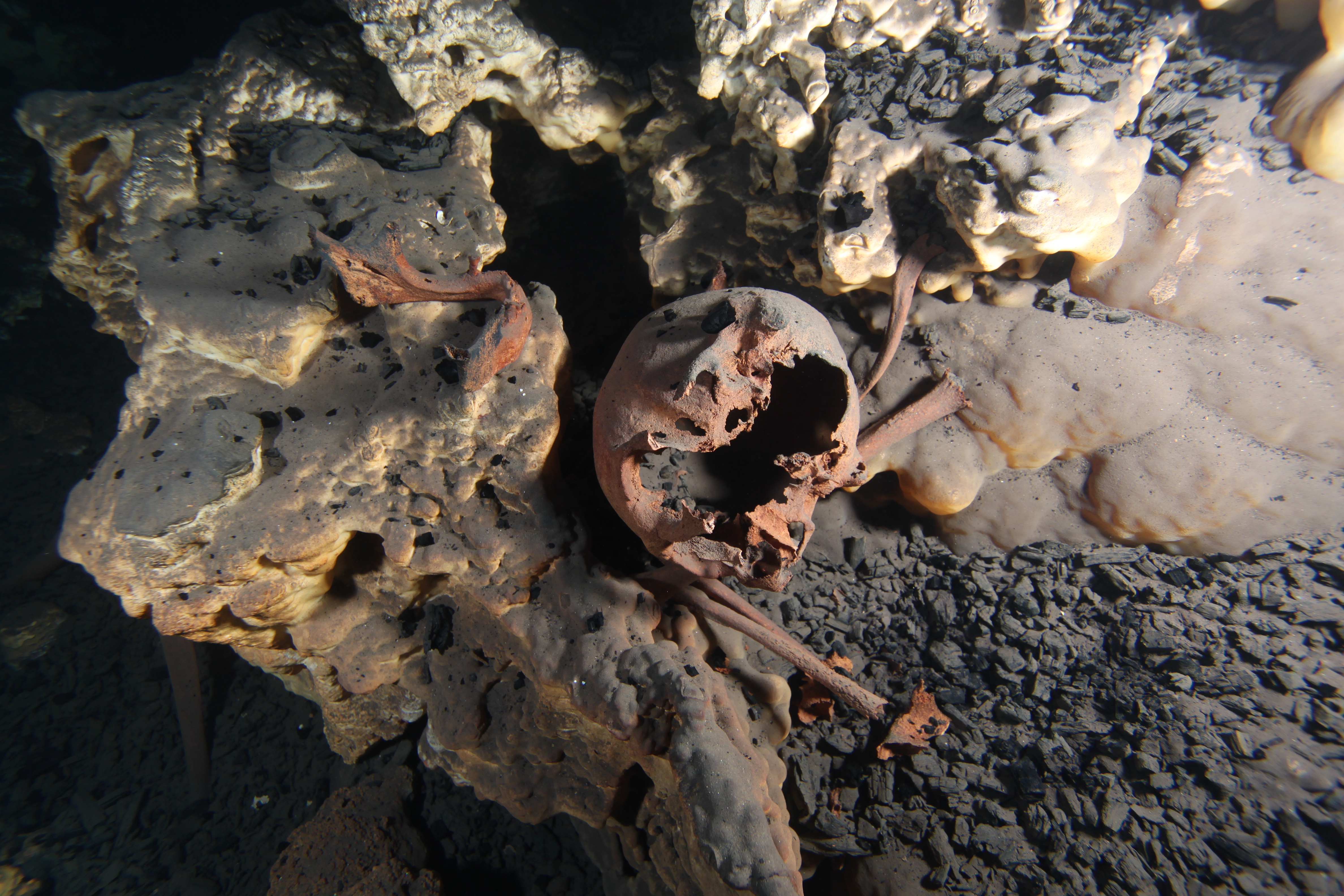 One of the skulls in the study, shown in situ inside Muknal, an underwater cave. (Credit: Jerónimo Avilés)