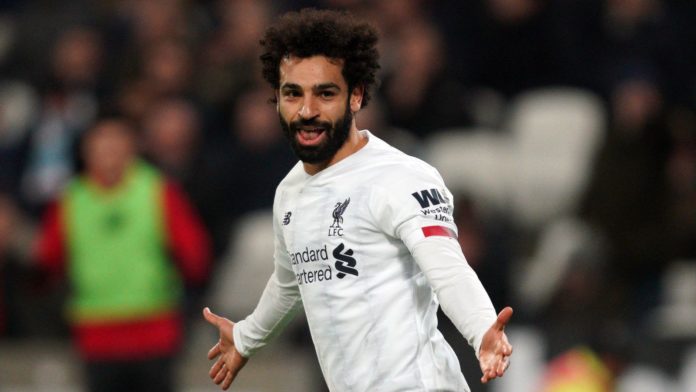 Mohamed Salah was the star man as Liverpool extended their lead at the top of the Premier League to a huge 19 points by beating West Ham 2-0 at the London Stadium.

Salah crashed in a first-half penalty (35) to put the visitors on their way and Alex Oxlade-Chamberlain slotted in a second (52) as Liverpool made the most of their game in hand on their distant pursuers.

Jurgen Klopp’s side may not have been at their absolute best but they have now beaten every one of their league opponents at least once this season – a feat they last achieved 124 years ago.

Their 23rd victory from 24 Premier League games this season leaves their latest victims 17th in the table, only out of the relegation zone on goal difference.

How Liverpool racked up win number 23…

Liverpool immediately took control of possession, with West Ham happy to sit off their visitors until they moved into their half, but, despite dominating the ball, Liverpool initially struggled to find a way through David Moyes’ well-drilled defensive lines.

Instead, there were promising moments for West Ham on the break, with Manuel Lanzini firing wide from an offside position and 19-year-old debutant Jeremy Ngakia clipping a dangerous cross into the Liverpool area.

However, Liverpool eventually began to find their rhythm and should have gone ahead on 25 minutes when Salah played in Andy Robertson, but the left-back’s chip over Lukasz Fabianski did not have enough on it and Issa Diop was able to get back to hack clear.

Robertson then fizzed a cross through the West Ham box as Liverpool stepped up the pressure before neat play from Roberto Firmino found Divock Origi in the box and some quick feet from the striker – in for the injured Sadio Mane – drew the foul from Diop.

It appeared to be a clear penalty but Salah was forced to wait for a protracted VAR check on a potential handball against Firmino. The Egyptian was not rattled, though, and, once cleared to take the spot-kick, he fired the ball into the bottom corner to get Liverpool rolling with his 12th Premier League goal of the season.

West Ham should have levelled shortly after half-time when Lanzini scuffed a shot from Declan Rice’s cross straight at Alisson, and they were made to pay moments later.

Firmino was denied by a fine save from Fabianski but the West Ham goalkeeper could do nothing when Liverpool broke away from defending a corner and Salah sent Oxlade-Chamberlain through on goal to slot home.

West Ham almost pulled off an immediate response of their own but Alisson, at full stretch, pushed away Robert Snodgrass’ drive from the edge of the area before Fabianski traded a similar stop at the other end to keep out Origi.

The hosts were almost given a lifeline in bizarre circumstances when Trent Alexander-Arnold fired a clearance against his own post on 72 minutes after Rice had capped a superb run by firing straight at Alisson.

But Liverpool were in the ascendancy and, with their fans singing ‘we’re going to win the league’, Salah hit the woodwork with a fine curling shot before Fabianski saved from sub Naby Keita.

West Ham – who had good chances throughout – nearly earned a late consolation when Rice forced Alisson into another good diving stop, but Liverpool notched up another convincing win on their march towards glory.

West Ham are back in action at the London Stadium on Saturday when they host Brighton in the Premier League, while Liverpool entertain Southampton at Anfield on the same day.