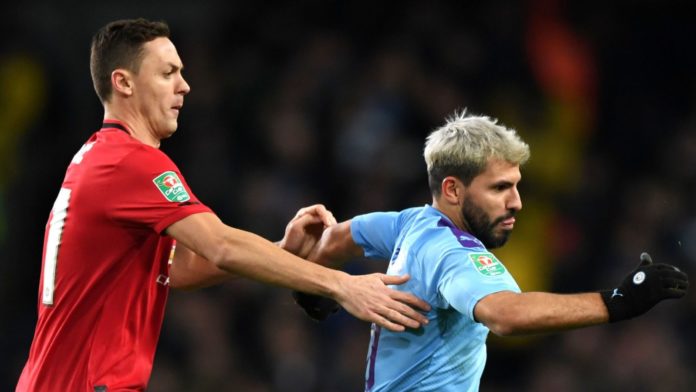 Highlights and report from the Carabao Cup semi-final at the Etihad Stadium as Nemanja Matic struck the only goal on the night but Manchester City edged through.

Manchester City scraped into the final of the Carabao Cup despite losing 1-0 in the second leg of their semi-final to Manchester United on Wednesday night.

It seemed like it would be a stroll of a second leg for City, having won the first leg 3-1 at Old Trafford three weeks ago, but Nemanja Matic’s first-half strike made it a far nervier affair than most at the Etihad were expecting – securing an eventual 3-2 win on aggregate.

City spurned several great opportunities in the second half, but their quest to progress to the final of the competition they are trying to win for a third consecutive time was made easier by Matic’s late red card to leave United with 10 men.

Pep Guardiola’s side will face Aston Villa in the final at Wembley on Sunday, March 1 – live on Sky Sports Football – after Villa beat Leicester in the other semi-final.

United caused City all kinds of problems at the Etihad in the Premier League in December, but there were no signs of a repeat in the early stages. City started well and David de Gea was forced into early saves inside the first 10 minutes, denying Sergio Aguero’s close-range header and then Riyad Mahrez’s deflected attempt.

Completely against the run of play, however, United got themselves back into the tie. It came from their first shot of the game as Fred’s free-kick was only cleared as far as Matic, and he struck a fierce low shot from 15 yards which left Claudio Bravo with no chance whatsoever.

City’s grip was loosened, and they looked briefly shaken. On 42 minutes they thought they were level on the night as Raheem Sterling poked in from Kevin De Bruyne’s cross from the left, but the England man was rightly flagged for offside.

Sterling missed another golden opportunity for City on 59 minutes. This time he was onside as De Bruyne released him in behind, but he opted to cut inside rather than drive on and shoot, eventually firing over the bar as United defenders scrambled back to make it awkward for him.

Another glorious chance went awry for City after 74 minutes, too. Harry Maguire lost the ball in his own penalty area and presented substitute David Silva with the perfect chance to pop the ball past De Gea, but he opted to pass to Ilkay Gundogan, who was quickly closed down.

Matic, who had been booked early in the second half for a foul on Mahrez, was walking a fine tightrope with the referee after a few poor challenges, and eventually Andre Marriner’s patience ran out after the Serb hauled down Gundogan, and he showed him the second yellow.

Aguero then had the ball in the net again for City late on after being flicked in by Joao Cancelo, but again he was correctly flagged offside.