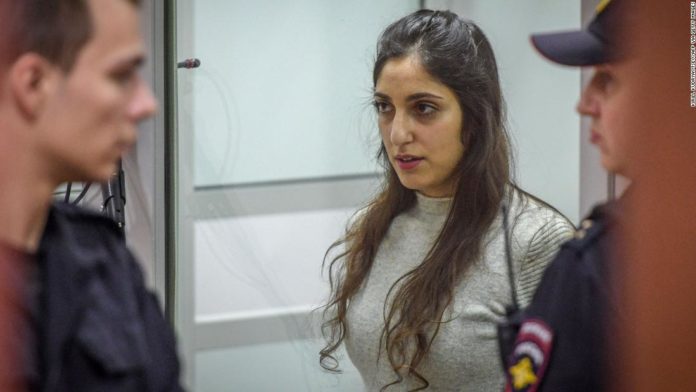 According to the statement, the presidential decree pardoning Issachar on “humanitarian principles” is effective immediately.
Israel’s Prime Minister Benjamin Netanyahu, set to fly to Moscow directly from Washington following the White House’s unveiling of its Middle East plan, thanked Putin in a statement.
“I thank my friend, President Putin, on his granting of a pardon to Naama Issachar,” he said. “I expect we will meet tomorrow and we will discuss the deal of the century and the recent regional developments.”
The announcement comes nearly a week after Putin met with Yaffa Issachar, Naama’s mother, and Netanyahu in Jerusalem.
A dual American-Israeli citizen, Issachar has been in prison in Moscow since April when she was stopped at the airport for having 9.5 grams of marijuana in her checked luggage.
She was subsequently convicted of drug smuggling and sentenced to seven-and-a-half years in prison.
Since her arrest, Netanyahu has repeatedly pleaded Issachar’s case with Putin, asking the Russian President to pardon her and allow her to return to Israel.
For a while, Issachar appeared to be entangled in a three-way diplomatic battle between Israel, Russian and the United States.
Moscow was trying to secure the release of Aleksey Burkov, an IT specialist wanted in the United States on charges of hacking and credit card fraud. Burkov was arrested at Israel’s Ben Gurion airport in December 2015 as he was leaving the country.
Burkov’s family previously suggested a prisoner swap between Burkov and Issachar, according to Russia’s state-run RT television channel. However, he was extradited to the US in November.
Russia’s state-run TASS news agency reported, quoting Kremlin aide Yuri Ushakov, that the Patriarch of Jerusalem, Theophilos III, had played a role in efforts to secure the 27-year old’s release, handing Putin a letter from Yaffa Issachar in November.
Israel recently decided to hand ownership of a parcel of property in Jerusalem’s Old City to the Imperial Pravoslav Palestine Society, a Kremlin-aligned religious organization.
The property, known as the Alexander Courtyard, sits outside of the Russian Orthodox Alexander Nevsky Church. It had been subject of years-long legal dispute between two Russian organizations until Israel’s Justice Ministry decided it belonged to the one more closely tied to the Kremlin.