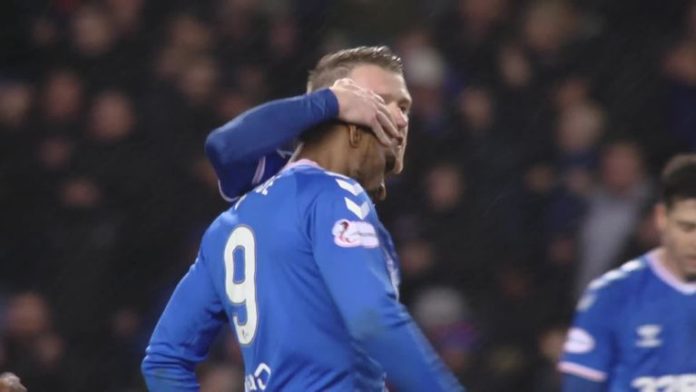 Scott Arfield also on target but Gers wait on Defoe

Rangers’ 2-0 win over Ross County came at a cost after goalscorer Jermain Defoe had to be stretchered off at Ibrox.

Defoe, who started despite top scorer Alfredo Morelos returning from his three-game suspension, delivered the spark his lacklustre side needed as he fired home his 17th goal of the season just before the break.

The former West Ham and Tottenham striker also laid on Scott Arfield for the second moments after the interval but Rangers boss Steven Gerrard – already without James Tavernier, Ryan Jack, Filip Helander and Greg Stewart due to injury – faced a fresh blow after Defoe pulled up with no one near him as he chased a long ball.

With Morelos nursing a calf strain of his own, Gerrard will have to decide whether he goes in search of extra striking cover ahead of Friday’s transfer deadline.

“I don’t think it’s as bad as going off on a stretcher makes it look,” Gerrard said. “He’s walking about in the dressing room. He’ll be scanned in the next 24 hours and we’ll know more about it then. But he has got a calf injury – whether it will be a week, two weeks, three or four weeks, I don’t know.”

Injury worries aside, Gerrard will have been pleased to see his side respond to Sunday’s defeat to Hearts. They sit five points behind the leaders with a game in hand, while County stay ninth having taking just two points from the last 18 available.

For 41 minutes it looked as though the visitors were set to have a bigger say in the title race as they set about frustrating Rangers just like the Jambos.

Staggies keeper Nathan Baxter produced a strong hand in the ninth minute to keep out Ryan Kent’s low strike and with Celtic ahead early in Perth, the Ibrox faithful were growing restless as they worried about falling further behind their rivals.

But out of nothing Defoe steered his team back on course.

There looked little on as Arfield nudged a Borna Barisic cross into the box but Defoe used all his predatory instincts to spin away from Keith Watson before hitting a low strike that Baxter could not handle.

The sense of relief around the ground was palpable and with the burden lifted, it was no surprise to see Rangers cut loose and add a second barely a minute into the second period.

Sheyi Ojo collected from Matt Polster and drove inside to find Defoe, whose first-time flick took the Dingwall defence by surprise but Arfield pounced as he drove through the middle to poke home number two.

McKay flashed just wide of Allan McGregor’s goal to give the hosts a reminder there was work still to be done.

But soon the concern around Ibrox was not for the result but for Defoe. A hush fell over the ground on the hour mark as he pulled up, with the worry growing as he was carried off on a stretcher.

The noise levels soon soared as Morelos made his long-awaited return seven minutes later. But there was no comeback goal for the Colombian as Baxter kept out his stoppage-time drive.