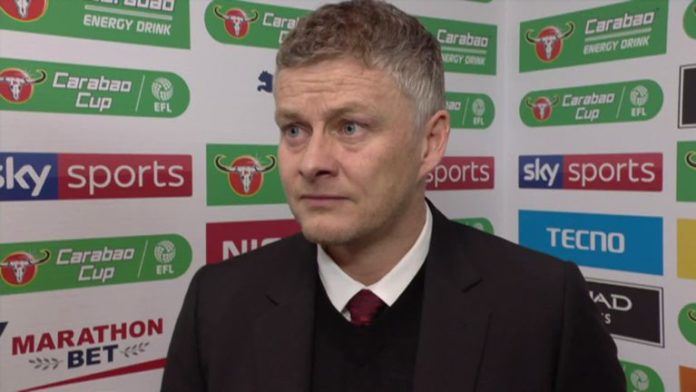 Matic was handed a yellow card in each half, leaving United with 10 men and needing a goal to force penalties

After Matic himself opened the scoring at the Etihad in the Carabao Cup semi-final, second leg, making it 3-2 to City on aggregate, the Serb was first given a yellow card for a foul on Riyad Mahrez, before tugging back Ilkay Gundogan with 14 minutes remaining to make United’s task even harder.

United boss Solskjaer was not shy in criticising referee Andre Marriner’s decision, pointing to City’s own cynical fouls. In fact, both sides committed the same number of fouls, while Solskjaer also pinpointed fouls on Dan James (fouled once) and Jesse Lingard (three times).

“Yep, the last one is a yellow card, but a red overall? Nowhere near. How many times did they foul us today? How many times was Dan James fouled? In the first half, Jesse?

“They’ve given us absolutely everything these boys, I’m so incredibly proud. To come here and win twice in a short space.”

Fletcher: Why did Fred take free-kick?

Speaking on Sky Sports after the game, former United midfielder Darren Fletcher could not understand why Fred took a stoppage-time free-kick from just outside the area…

“United had a free-kick late on, their one glimmer of hope, and the one thing that surprised me is that Fred took it while Juan Mata was on the pitch!”

But Solskjaer explained why the Brazilian, who has only scored once for United, stepped up ahead of Mata…

“They practised yesterday, Juan told me Fred was unbelievable in training yesterday, he scored six or seven on the bounce.”

De Bruyne: Did United even have a chance?

City midfielder Kevin De Bruyne, although happy to reach Wembley to face Aston Villa on March 1, struggled to understand City’s defeat on the night, and questioned whether United had any chances in the 90 minutes…

“I can’t really comprehend how we lose this game, for me United didn’t even have one chance today. We were way too wasteful at the other end,” he said.

“I think we got sloppy. We don’t clear the lines good, and out of nothing they scored. You can tell me if United had another chance?”

Speaking after the game, Pep Guardiola heaped praise on Manchester United, saying their front players are incredible, and going as far as saying he likes the way they play…

“I said when we lost here [in December], they don’t need much. The quality of players up front is incredible. I have the feeling that they are trying to do what the manager Ole wants and I think it works. Maybe they are not consistent in all the games, maybe at home they struggle against the teams that defend deep but I like the way they play.

“The quality of Victor Lindelof, I saw it at Benfica. Luke Shaw is an incredibly talented player, Harry Maguire, we are talking about one of the best central defenders in the world. The people up front are so fast, Matic and Fred are incredible players. Matic is an outstanding player. So if you give them time, they will come back to what United was for many years.”

Despite United making the tie closer than it should have been, City boss Guardiola also insisted he was not concerned about the visitors…

He told Sky Sports: “We played really well in both games, we were fantastic, we conceded the goal from the only time they shot. We were solid and we created enough chances to score a lot of goals. The same at Old Trafford, we created even more chances [tonight] but didn’t convert, we have to learn from that to be more clinical. Of course we have to take the chances we have, the clear chances.”