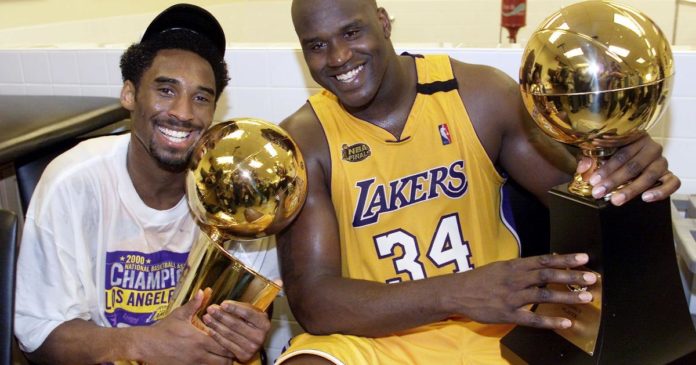 Tears streamed down NBA legend Shaquille O’Neal’s face as he opened up about losing his “little brother” Kobe Bryant during a special ceremony on Tuesday.

“I haven’t felt a pain that sharp in a while,” O’Neal said during a TNT tribute to Bryant at the Staples Center.

The duo goes way back — the two spent eight season together on the Los Angeles Lakers, teaming up to win three straight championships from 2000 to 2002 under the leadership of coach Phil Jackson. But the relationship between Bryant and O’Neal was not always friendly during their playing years. O’Neal demanded the Lakers trade him in 2004, in large part because of his belief that Bryant was responsible for the team not renewing Jackson’s contract. They would go on to rekindle their friendship in the following years, however.

Bryant and eight other people, including his 13-year-old daughter Gianna, died in a helicopter crash on Sunday.

O’Neal, whose sister Ayesha Harrison-Jex died of cancer in October, talked about the rough couple of months leading to Bryant’s death.

“I haven’t been sleeping, I haven’t been doing the normal things I usually do. I work, we laugh, we kid and we joke. When I get back home and look at reality and see she’s gone, it just hurts,” he said.

O’Neal was working out with family members when he got the news of Bryant’s death. O’Neal said he snapped at his nephew when he told him about the crash and asked him to get the phone out of his face, believing the report was fake.

“And then we found out it was confirmed … I didn’t want to believe it” O’Neal said. “And I haven’t felt a pain that sharp in a while. Forty-seven years old. I lost two grandmothers, lost Sarge, lost my sister, but now I’ve lost a little brother.”

The four-time NBA champion said he felt “a triple stabbing to the heart” and noted he was “sick again” when he read what turned out to be false reports that Rick Fox, another former Laker, was on the helicopter too.

“The final blow,” he continued, “his lovely daughter was with him on the helicopter.”

O’Neal said that his friend’s death made him realize the need to let people around him know he cares about them more often.

“I just really now have to take time and call and say I love you. … I’m gonna try to do a better job of just reaching out and just talking to other people rather than always procrastinating because you never know,” he said.

“The last time I talked to him was when he was here [Staples Center] and I asked him to get 50 and he got 60. That’s the last time I spoke to him. I just wish I could have… you know… It definitely changes me,” he said.