Home Sport Klopp: My players could take care of my kids! 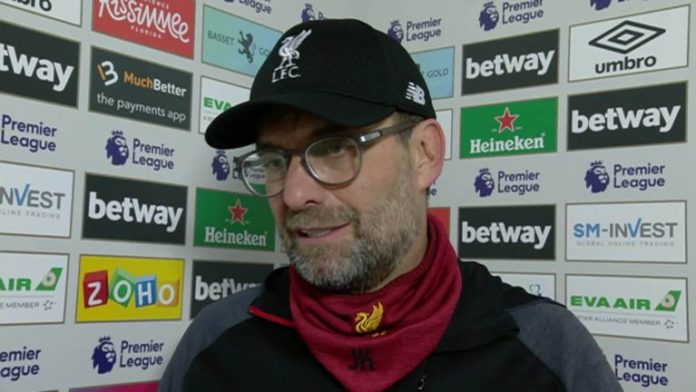 Mohamed Salah and Alex Oxlade-Chamberlain on target in Liverpool win

Jurgen Klopp joked he would trust his Liverpool players with his kids after his side went 19 points clear at the top of the Premier League with a 2-0 win at West Ham.

Despite dominating possession at the London Stadium, the runaway league leaders weren’t at their best but still had enough in their locker to see off their relegation-threatened hosts.

Klopp said West Ham’s defensive mindset made Liverpool’s task harder on Wednesday night but applauded the relentless ability of his side to walk away with three points regardless.

“It was not a brilliant performance, against a side obviously that’s insecure at the moment, but it makes it really difficult for us,” he said.

“A very important element in football is counter the counter, but for that the other team need to have counters and winning the ball back and using the space.

“We started pretty much each attack with a ball from a centre half against nine or 10 or 11.

“I wish we would have done better but I take it like it is because if it would be easy to win this amount of games and this number of points other teams would have done it. It’s just really, incredibly difficult.

“We played a super game against United, Leicester super game. Today was a game. We still had to win it and we did.”

West Ham had good chances of their own throughout the contest but Klopp insists most of those came from individual Liverpool errors – such as Trent Alexander-Arnold firing the ball against his own post in the second half.

“It’s not a motivational problem for us,” he said. “The difficulty was to get the rhythm, keep rhythm and to stay concentrated. I think their biggest chances we gave them.

“These boys I’d give them my kids to take care of them. I trust them 100 per cent but in these situations they still make these ridiculous mistakes. It’s nothing to do with motivation. It’s just staying concentrated when you are constantly in charge that’s so difficult.”

West Ham host Brighton on Saturday in the Premier League; Kick-off at 3pm. Liverpool face Southampton at Anfield at the same time.