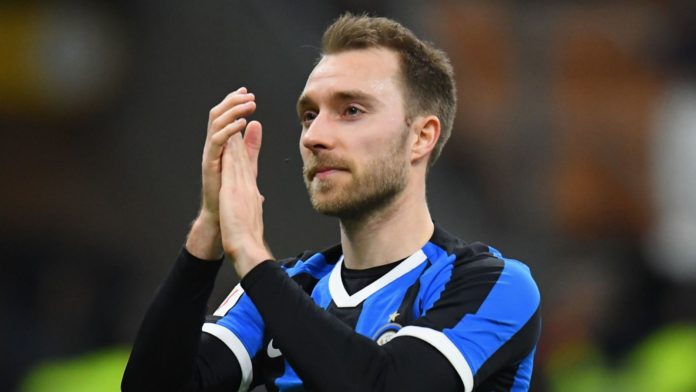 Christian Eriksen came off the bench to make his Inter Milan debut as Antonio Conte’s men made it through to the semi-finals of the Coppa Italia on Wednesday.

The Denmark star completed his £17.5m move from Tottenham on Tuesday and was immediately included in the Inter squad to face Fiorentina.

Eriksen began the game on the bench but replaced Manchester United flop Alexis Sanchez after 66 minutes as Inter earned a hard-fought 2-1 victory at the San Siro.

Antonio Candreva put Inter in front on the brink of half-time, before a Martin Caceres header drew the visitors level on the hour mark.

But a blistering strike from Barella decided the quarter-final as the midfielder raced onto a headed clearance to rifle in a low shot in the 67th minute, just moments after Eriksen had come on.

Inter, who have won the Coppa Italia on seven occasions but not since 2011, will face Napoli over two legs between February and March for a place in the final, against either Juventus or AC Milan.

Luka Jovic, Lucas and Vinicius started in attack for Los Blancos and they went ahead when Varane tapped in at the far post from a Toni Kroos cross after just six minutes.

Lucas was then the beneficiary of another Kroos pass after 32 minutes with the winger producing a fine finish as he drove into the corner.

Vinicius made it 3-0 after a nice exchange with James Rodriguez before Benzema struck his first goal of 2020 from a Dani Carvajal cutback.

Ligue 1 leaders Paris Saint-Germain progressed to the French Cup quarter-finals with a comfortable 2-0 win at third-tier Pau on Wednesday.

Goals from Leandro Paredes and Pablo Sarabia either side of half-time were enough to earn the champions victory over their hosts, who caused a big upset in the previous round by knocking out top-flight Bordeaux.

PSG lifted four consecutive French Cup titles before finishing runners-up last year, and have won the competition more than any other side with 12 triumphs.

Thomas Tuchel made 10 changes to the side that beat Lille 2-0 on Sunday in the league, leaving Neymar out of the squad and dropping Angel Di Maria and Kylian Mbappe to the bench.

Mauro Icardi led the line and had a hand in both goals, chesting into Paredes’ path for the Argentinian’s volley before cutting back a cross that was diverted towards Sarabia for a close-range finish.

There was a huge shock as fourth-tier SAS Epinal defeated Ligue 1 side Lille, recovering from an early Loic Remy strike to win 2-1 thanks to a second-half double from Jean-Philippe Krasso.

Christophe Galtier’s side are seventh in the top division of French football, fighting for European qualification, while their conquerors are seventh in Group A of National 2.