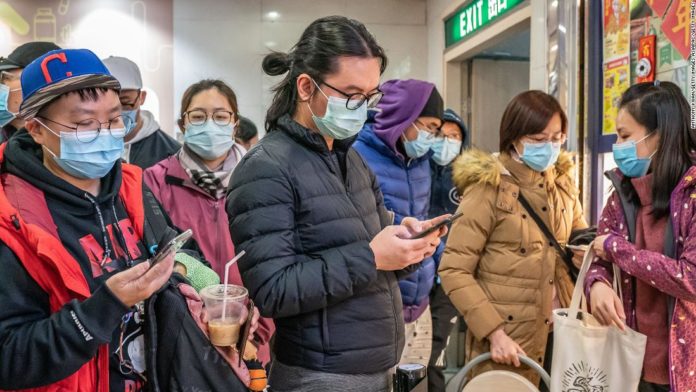 South Korea’s Kospi (KOSPI) dropped 0.5%, while Japan’s Nikkei 225 (N225) fell 1%. Hong Kong’s Hang Seng Index (HSI) — which on Wednesday suffered its worst day since August — lost 0.8%.
The coronavirus crisis keeps escalating. It has now left 170 people dead in mainland China. Mainland China also has more than 7,000 confirmed cases of the virus, with dozens more worldwide.
Airlines around the world have suspended flights to China in response. And analysts have said the virus could hurt China’s economy.
“We expect Asian investors to remain focused on the downside risk from the coronavirus outbreak for now as the number of confirmed cases continue to rise, albeit the majority of them in China,” said Tai Hui, Asia chief market strategist for JP Morgan Asset Management.
US Federal Reserve Chairman Jerome Powell, meanwhile, said Wednesday at the Fed’s policy meeting that the central bank is “carefully” monitoring the coronavirus situation. Powell predicted it will probably disrupt the Chinese economy. But he also noted that the economic disruption from the disease remains in “very early stages,” and it’s unclear how far it will spread and what the macroeconomic effects will be on China and its global partners.
The Fed held interest rates steady at its meeting, as expected.
Chinese markets remain closed on Thursday for the Lunar New Year holiday and are expected to reopen Monday.
— Donna Borak contributed to this report.