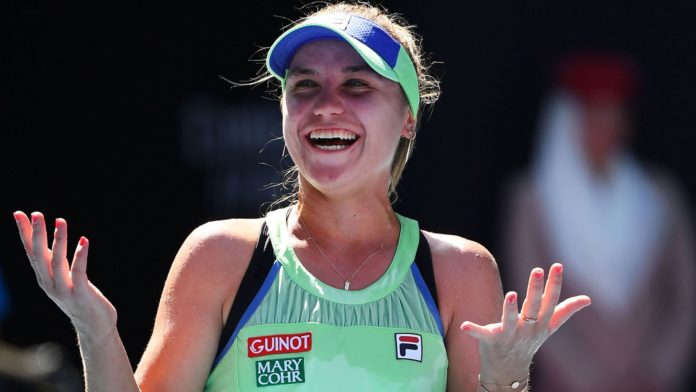 Barty was looking to become the first Australian woman to make the final in Melbourne since Wendy Turnbull in 1980 and, as the top seed and world No 1, expectations were sky high.

But 21-year-old American Kenin had other ideas and she took advantage of Barty’s understandable edginess on a steaming hot Rod Laver Arena to win 7-6 (8-6) 7-5.

Barty had two set points in both sets but could not convert any of them and Kenin reeled off the final four games of the match.

“She’s such a tough player, she’s playing really amazing and I knew I really needed to find a way to win,” said Kenin.

“She came up with some really great shots, it was really tough. There’s a reason why she’s world number one. I’m just so thankful for this.”

The Russian-born Floridian, who had never had been past the fourth round at a major tournament until now, could scarcely believe what she had achieved, and this victory will be enough to take her into the top 10 whatever happens on Saturday.

Barty, a reluctant celebrity, had spent the fortnight refusing to buy into the hype, but there was no doubt how much this meant to her.

The top seed could not pull away from Kenin, though, seeing three break points come and go at 3-2 and then a lead evaporate in the tie-break.

Barty had two set points at 6-4 but tightened up and her opponent took full advantage, winning the last four points.

Kenin from out of nowhere

She burst onto the scene in 2019 by winning three singles titles, upsetting Serena Williams in the third round at the French Open, and soaring from No 52 to No 12 in the rankings.

She didn’t face a seeded player in this tournament until Thursday, but did eliminate 15-year-old sensation Coco Gauff in the fourth round.

Kenin’s talent and competitive nature marked her out from an early age so it was no surprise to see her rise to the occasion on the biggest day of her tennis life.

As the temperature soared to 38 degrees, it was Barty who made the move in the second set with a break for 2-1, the baking fans on Rod Laver Arena willing her on.

Serving for the match at 5-4 she was poised to push the contest to a decider but again was unable to play freely and Kenin, whose speed of foot is matched by her speed of thought, continued to make life difficult.

The American saved two set points before retrieving the break and kept her foot on the accelerator to take her second match point.

Barty conducted her press conference while bouncing her 12-week-old niece Olivia on her lap.

Barty kept perspective on her defeat, saying: “I think it was a match where I didn’t feel super comfortable. I felt like my first plan wasn’t working. I couldn’t execute the way that I wanted. I tried to go to B and C.

“It’s disappointing. But it’s been a hell of a summer. If you would have told me three weeks ago that we would have won a tournament in Adelaide, made the semi-finals of the Australian Open, I’d take that absolutely every single day of the week.

“But I put myself in a position to win the match today and just didn’t play the biggest points well enough. I have to give credit where credit’s due. Sofia came out and played aggressively on those points and deserved to win.”