Home World This was supposed to be a billion-dollar week for China’s box office.... 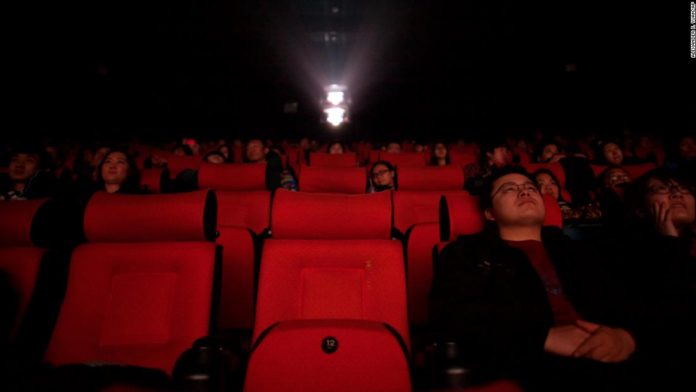 The country’s biggest holiday, the Lunar New Year, is typically a boon for cinemas and studios as many residents catch a movie during their week off.
In 2019, the holiday period brought in more than 5 billion yuan (about $721 million) at the box office, accounting for almost 8% of China’s annual ticket sales, according to state news agency Xinhua.
This year will be different. Thousands of cinemas have been closed around the country due to the outbreak of the deadly Wuhan coronavirus, forcing theater chains to issue refunds and fans to stay home.
To help mitigate the spread of the virus, the government has extended the holiday from Thursday to Sunday, leaving countless businesses, including theater operators, in limbo.
Nearly 60 million people are under partial or full lockdowns across several Chinese cities.
The outbreak is upending a cinema industry that produces over $9 billion a year in sales, second only to the United States, and forcing some film studios to take drastic action to avoid financial catastrophe.

Chinese ticket sales for the week had been expected to reach as much as $1 billion, according to Max Lei, the CEO of film and television production company Amor Films. The Lunar New Year holiday is usually the biggest week of the entire year for China’s box office, he added.
Now, “the box office will definitely lose a lot,” he told CNN Business, estimating that this season’s intake would drop by at least 25% compared to the amount forecast.
Several blockbuster movies that were set to release during the holiday season in China were pulled last week.
Producers and distributors canceled or postponed all seven Chinese films that were due to hit cinemas over the weekend, citing the lack of ventilation in movie theaters and the highly contagious nature of the coronavirus.
Major cinema chains such Jinyi, CGV and Bona have closed in response to the outbreak, and many online ticketing platforms are promising to refund customers.
Wanda Cinema, China’s largest film distributor with over 500 cinemas across the country, also said it would refund tickets for those who chose not to go the movies.
While many films will still come out later this year, they won’t receive the same momentum and excitement that typically helps drive ticket sales during the Lunar New Year, said Lei.
“There will be no more explosive force,” he added.
With no end to the outbreak in sight, the pain could continue and even drag in US companies.
Disney (DIS), which is preparing for the release of its live-action remake of “Mulan” this spring, could also see an impact, analysts at JPMorgan wrote in a note this week.
The film is set to open in March in the United States. While Disney hasn’t announced a Chinese release date yet, the movie was expected to arrive in China around the same time.

One major studio, Huanxi Media, chose to forgo a theatrical debut for its new film altogether.
It elected to show its newest title, “Lost in Russia,” for free online last week. The movie was made available Friday on Huanxi’s streaming service, as well as on platforms owned by ByteDance, which became the studio’s partner last week.
Under the agreement, ByteDance will pay Huanxi about 630 million yuan ($91 million) to stream Huanxi’s content on its apps and also eventually work with its team to create a “cinema channel,” according to a stock exchange filing.
Huanxi said Wednesday that it decided to pull the movie from theaters due to “the rapid development of the coronavirus in China.”
This means that people “can stay home … reducing the chance of infection, and enjoy the film during Chinese New Year at this difficult time,” a spokesperson for the company told CNN Business.
“Lost in Russia” — a highly anticipated comedy that is part of a popular franchise in China — had been projected to bring in at least 2.4 billion yuan ($346 million) in ticket sales, according to a stock exchange filing made by Huanxi.
The company’s move was bitterly protested by its distribution partners, who threatened in an open letter last week to boycott future business with Huanxi, accusing the studio of harming their businesses and acting “selfishly.”
One cinema operator, Quan Guo, said it had endured “tremendous financial loss” from the decision. The company described how it had spent time promoting the movie, “only for the benefits to be reaped by online users.”
Huanxi Media CEO Steven Xiang said that his team had been forced to act quickly — essentially “in 48 hours” — due to how fast the virus was spreading.
“It was a rushed decision,” albeit one that the company stands by, he told CNN Business.
The studio did not share how much it now expects to make from the movie, saying that it was “still early to determine the final financial numbers.”
Xiang said that in addition to the fee paid by ByteDance, Huanxi plans to make money on its digital release through ads that are shown on ByteDance’s video platforms. He added that the film had racked up some 600 million views over the first three days, which was “encouraging.”
Huanxi may not be the last company to shift away from theaters as the outbreak worsens. If business doesn’t return to normal within the next two months, more movies could be “launched on the internet,” said Lei.
— Serenitie Wang and Sherisse Pham contributed to this report.