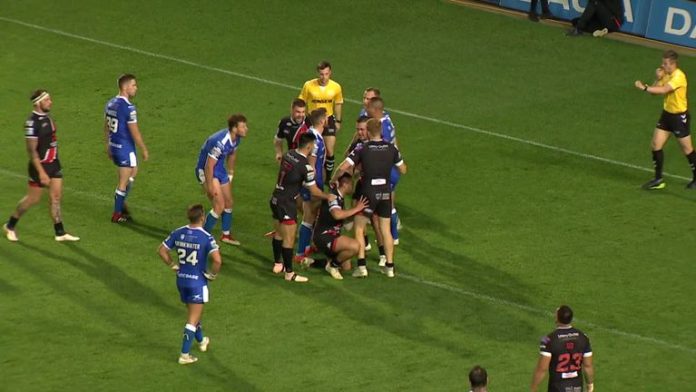 If you were to sum up the 2019 season for Tui Lolohea, perhaps the best way to describe it would be the worst of times followed by the best of times.

That is pretty much how the man himself looks at it, anyway.

A move to Leeds Rhinos from Wests Tigers on a three-year contract ended in Lolohea moving on after just 17 appearances in the aftermath of the early-season turmoil which led to head coach David Furner’s sacking after barely six months in charge.

But joining Salford, with Robert Lui moving in the other direction, proved reinvigorating for the half-back as the team went on an unlikely run to a maiden Super League Grand Final, where they went down to runaway league leaders St Helens.

And, to top it all off, the 25-year-old was part of a historic winter for the Tonga national team as they defeated Great Britain and then became the first Tier Two side to overcome long-standing kings of international rugby league Australia.

“It turned out to be an amazing year,” Lolohea told Sky Sports. “I was near my lowest and then at my highest, so I’ll never forget the year I had at Salford and at Leeds.

“It’s all part of rugby league and learning as you go. I enjoyed my time at Leeds, even though it didn’t work out and I probably didn’t help myself being inconsistent, but (head coach) Ian Watson and (CEO) Ian Blease did a good job of taking me into their team at Salford and buying into their culture.

“Making the Grand Final was amazing and not many people get to say they’ve been in one at the highest level. Then to win that tour with Tonga was special and that’s probably the highlight of my career so far.”

Despite not joining the Red Devils until midway through the season, Lolohea was able to settle quickly into life at the AJ Bell Stadium and ended up being an integral part of their run to the Grand Final after seamlessly striking up a partnership with Jackson Hastings.

Man of Steel Hastings has switched to Wigan Warriors, with Salford recruiting former England international Kevin Brown, who was sidelined for the entire 2019 season with an Achilles injury, from Warrington Wolves to fill that void.

“I was near my lowest and then at my highest, so I’ll never forget the year I had at Salford and at Leeds. It’s all part of rugby league and learning as you go.”

Despite the marked differences in Hastings and Brown’s respective playing styles, Lolohea has found it easy to build a new partnership with the 35-year-old and is in no doubt his experience will be a huge asset to the Red Devils.

“I’m really enjoying it,” Lolohea said. “Kev is a really experienced player who has played at the highest level. He’s got a full pre-season under his belt after that injury with his Achilles and I think he’s going to surprise a lot of people this season.

“The way I’ve seen him train and play in these trials, he’s been close to one of our best and I’m really excited to see what he’s going to do this year.

“He’s a different player to Jacko. He’s experienced and that’s a big part of rugby league. You get those halves who have been there long enough to know the game inside out, so it’s going to be cool.”

In many ways, last year was about proving the naysayers wrong for Lolohea on a personal level along with a team level and there is an element of the latter again in 2020.

But rather than just showing the doubters they are capable of competing on Super League’s grandest stage, the aim this time around is to silence those saying the Red Devils were a one-season wonder and cannot reach those heights again after the departure of some key squad members.

“There are a lot of people who have gone, but there are some new signings who have come in and we’ve got some good strike in our team too.

“Dan Sarginson (signed from Wigan) has been massive for us in these trials, he just works hard and he’s really competitive, which is a bonus for us.”