Home World The superyacht that thinks it’s a jumbo jet 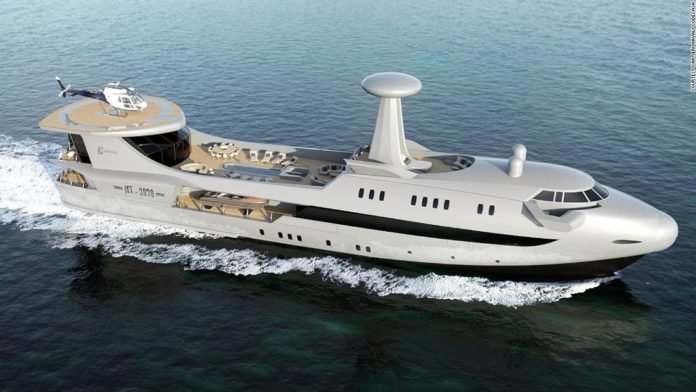 (CNN) — The world of superyachts meets the world of aviation with this “one-of-a-kind” vessel that expertly merges aerial and nautical models.

Italian shipyard Codecasa has unveiled plans for the new 230-foot superyacht concept which looks like a floating jumbo jet.

Designed by owner Fulvio Codecasa, the upcoming Codecasa Jet 2020 is shaped like an aircraft and “borrows” many of its stylistic features.

The end result is a huge superyacht with airplane-style rounded windows, a bow that resembles the nose of an aircraft and a forward section reminiscent of a cockpit.

A rendering of the Codecasa Jet 2020, which is described as a “one-of-a-kind creative explosion.”

Codecasa aims to “set a new trend in the industry” with the vessel, which is to house a huge sundeck, a swimming pool, a skylounge, a gym and a beach club with its own elevator.

The superyacht will hold radar antennae installed inside carbon fiber domes “in the typical style of the AWACS airplanes,” according to a statement from Codecasa, referring to Airborne Warning And Control System long-range radars often deployed for military operations.

There’s also an onboard helipad big enough to accommodate medium to large sized helicopters, as well as a pilothouse and a captain’s cabin.

While its technical specifications and price are unconfirmed at this time, the building process is likely to begin later this year.

While it’s unclear when the vessel will be delivered, building is due to begin later this year.

Once the Codecasa Jet 2020 is delivered, the shipyard hope it will become the flagship of Codecasa, which was founded by Giovanni Battista Codecasa in 1825.

The unconventional concept is the latest in a string of innovative superyacht projects to be announced over the past few months as designers and shipyards continue to push the boundaries as far as they can.