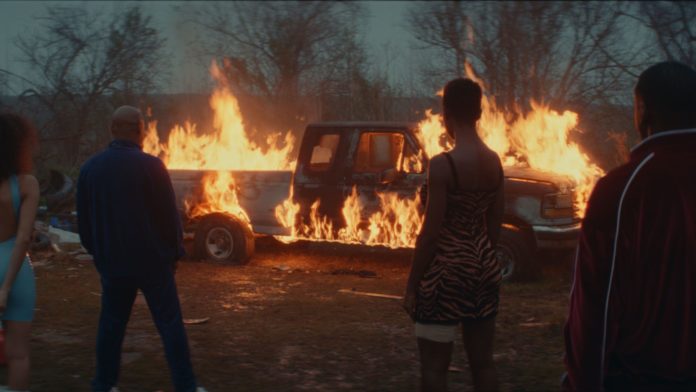 Daniel Kaluuya’s ascent to fame was as steep as they come.

The London-born actor’s breakthrough role in Jordan Peele’s 2017 film Get Out earned him his first Oscar, BAFTA and Golden Globe nominations, and brought him to the attention of casting directors across Hollywood.

He followed that up with roles in the big budget ensemble films Black Panther and Widows, and now his latest project, Queen & Slim, sees him on the credits as an executive producer as well as the star.

Speaking to Sky News’ Backstage podcast, Kaluuya said he is trying to change the status quo in the film industry.

“There’s a narrative that films with black protagonists don’t travel,” he said. “I wanted to do all that I can to facilitate and to annihilate that narrative.”

Kaluuya, 30, said that “a lot of the detail” involved in executive producing the film surprised him.

“But they’re the conversations I want to be a part of, and the hierarchy and the kind of politics behind it,” he said.

“[I’m] just trying to go out there and learn on the frontline.”

So was it a learning curve?

“Yeah, life is a learning curve.”

Kaluuya plays the titular Slim in Queen & Slim, a slick new road movie about a first date which takes an unexpected turn when a police officer pulls them over.

The film is directed by Melina Matsoukas, who previously worked with Beyonce on Formation, and written by Lena Waithe, the first black woman to win an Emmy for outstanding writing for a comedy series, for Master of None.

Newcomer Jodie Turner-Smith plays the other lead in what will undoubtedly be a breakthrough role for her.

Turner-Smith told Backstage podcast the part was an incredible opportunity.

“This is the first time something like this came along, and I haven’t really been doing it for very long, so it was absolutely a dream role,” she said.

“To have a woman who is so complex and dynamic and interesting and really three-dimensional, she really jumped off the page.

“And I was excited to be able to, you know, wrap my arms around something like that.”

Both the actors will be at this weekend’s BAFTA awards, as they’re presenting one of the prizes.

Asked how he feels about there being only white nominees in the acting categories, Kaluuya said: “I don’t know about all that, I just don’t know.

“Like, I can’t say, because I’m not next to people on their computers whilst they’re voting.

“Look, we make films to connect with people, and that’s what we made Queen and Slim for, to connect with someone that’s I dunno, working in a bank and stuff, and then coming through, spending their money to come watch film.

“So if we get recognised, amazing. If we don’t, amazing. But we’re here to connect with people.”

Queen and Slim is out in cinemas on 31 January. Sky News’ Backstage podcast is out weekly