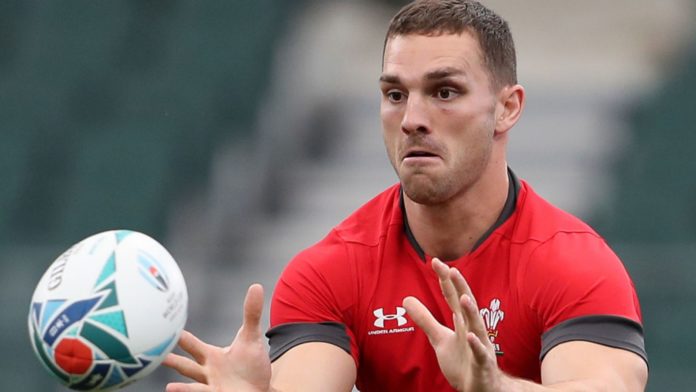 Wayne Pivac says Wales’ coaching staff are very happy with what they have seen from George North after his switch to centre for Saturday’s Six Nations opener against Italy.

The Ospreys wing will win his 92nd cap this weekend it is just his fifth appearance in midfield – and a first since June 2018.

With Jonathan Davies sidelined for the entire campaign because of a knee injury, North gains an opportunity to fill that considerable vacancy.

Uncapped Saracens centre Nick Tompkins has been named on the bench, while another midfield squad member – Owen Watkin – is continuing his recovery from a knee injury.

“George played a couple of games at centre for the Ospreys, which was great for us,” said Wales head coach Pivac.

“He’s had four starts there for Wales as well, so it’s not foreign to him.

“I’ve got to say George has trained very well and he has taken the challenge up. He is very much looking forward to a fresh start, if you like, this weekend.

“Jonathan [Davies] has got the long-term injury at the moment and somebody is going to get the opportunity to play there.

“George gets the first crack at it, and from what we are seeing, we’re very happy.”

Tompkins, who qualifies for Wales through his Wrexham-born grandmother, will provide midfield cover for North and Hadleigh Parkes.

Pivac has handed a Test debut to Scarlets wing Johnny McNicholl, while fit-again Bath No 8 Taulupe Faletau is recalled.

Tompkins, 24, played for England Saxons in 2016, but he was not ‘captured’ by England as their opponents – South Africa A – were not South Africa’s recognised second team at the time.

New Zealand-born McNicholl, 29, qualifies for Wales on residency. He scored a try during the non-cap game against the Barbarians in November.

But Wales have lost back-row forward Josh Navidi due to a hamstring injury, and Pivac added: “He has had a scan, and [he’s] done some damage there.

“He will be out for a few weeks. I couldn’t put a number on it. The medical team will try and get him back out there as soon as possible.”

Watkin, Liam Williams, Gareth Davies and Elliot Dee could be in contention for next week’s Dublin appointment with Ireland after not being considered for Italy as they continue recovering from injuries.

For Faletau, Italy’s Cardiff visit will be his 73rd cap, but a first Wales appearance since March 2018.

He has endured a prolonged injury-hit spell in his career and missed the World Cup earlier this term because of a collarbone issue.

There is no place in the matchday 23 for uncapped 18-year-old Gloucester wing Louis Rees-Zammit, who has scored 10 tries in 12 games for his club this season.

But Rhys Webb is included among the substitutes, with the scrum-half rejoining the Ospreys next term and now being available for Wales selection again following a stint with French club Toulon. He last played for Wales just over two years ago.

“Rhys has trained well. You can see the experience he brings, and he will get some game-time.”

And on Rees-Zammit, Pivac added: “When we selected Louis [for the squad], we looked at the Italian game as being a possibility.

“Unfortunately, he came into camp with an injury and couldn’t train much last week.

“He hasn’t had the opportunities that Johnny McNicholl and Josh Adams have, so it has counted against him. But he looked good on Tuesday when he trained, and he’s got a big, bright future in the game.”

“We’re working hard on our attack, but it’s going to take a little bit of time,” he said.

“Some of the skill-sets need to improve but where there is a will, there is a way. At the moment the boys are very willing, so it’s a pretty good start in terms of training.

“Everyone starts on zero, the Italians are in front of us and we have to knock them over. Then we have to worry about the Irish and the French, English and Scottish.”