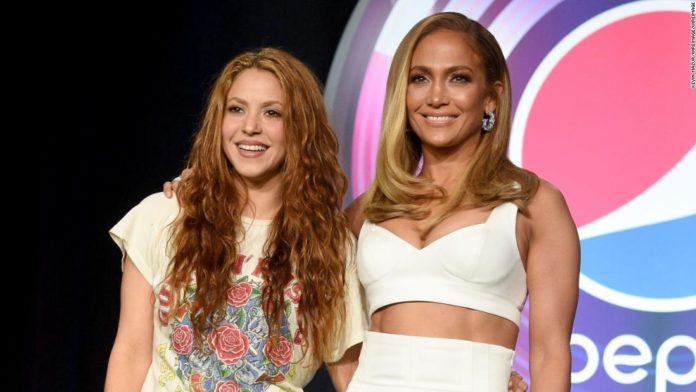 During a Miami press conference Thursday, Jennifer Lopez and Shakira discussed some of what they have planned for Sunday’s 12-minute performance, during what is officially known as the Pepsi Super Bowl LIV Halftime Show.
Lopez said there will be a “heartfelt” moment when someone asked whether she would be honoring Bryant, who died last Sunday in a helicopter crash in Calabasas, California.
“We’ll all be remembering Kobe on Sunday and celebrating life and diversity in this country,” Shakira added. “I’m sure he’d be very proud to see the message we are trying to convey on stage that day.”
While Lopez said she didn’t want to give away too much, she said the show will be “packed.”
“When we did the first run-through, Shakira was like, ‘That was great.’ It’s different what we do,” Lopez said of their individual styles. “It’s very Shakira and very Jennifer.”
The two superstars complement each other, Shakira explained, with Lopez adding that two women running the halftime show is “empowering.”
“Two Latinas doing this in this country at this time is very empowering for us,” she explained.
Lopez declined to comment on speculation she would be bringing her two kids on stage during the performance.
There were a few awkward moments during the press conference, like when James Corden’s father (for reasons yet unclear) got up to play “Jenny from the Block” on his saxophone and asked Lopez to sing along.
“You’re in the wrong key,” she told him.