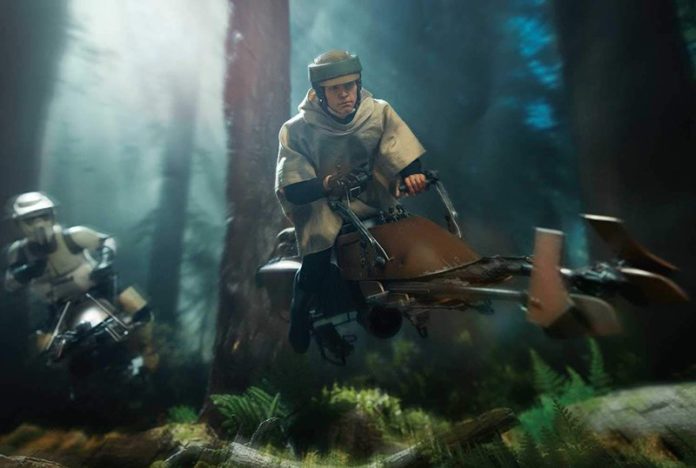 After revealing a first look at Insight Editions and Sideshow Collectibles’ Star Wars: Collecting a Galaxy, ComingSoon.net got the opportunity to talk with author Samuel Spitale and Sideshow art director/sculptor Matt Black about the book! Check out the interview below!

Sideshow Collectibles has been immortalizing fan-favorite Star Wars characters for over a decade with their extraordinary, one-of-a-kind sculptures. Now, Star Wars: Collecting a Galaxy: The Art of Sideshow Collectibles which celebrates the artistry that goes into capturing the true essence of these iconic characters and the passion and devotion that brings them to life.

Featuring a foreword by legendary VFX creator Phil Tippett (who worked on the original Star Wars trilogy) and never-before-seen pre-production artwork and exclusive insights from the sculpting and design teams on the creation of each piece as well as dynamic photography that illuminates the power of their work, this book is the ultimate celebration of Sideshow’s ongoing journey into the Star Wars galaxy.

Celebrated for its unwavering dedication to quality, Insight Editions is a publisher of innovative books and collectibles that push the boundaries of creativity, design, and production. Through its acclaimed film, television, and gaming program, Insight strives to produce unique books and products that provide new ways to engage with fan-favorite characters and stories.

ComingSoon.net: Which piece in this book are you most connected to?

Matt Black: It might sound strange to pick one that I did not work on, but the Jabba on throne is absolutely my favorite. Every year for Christmas I asked for the Rancor monster. I never got it, but Santa did bring me Jabba, and I LOVED it. Now with the Sideshow version on my desk, I feel that sense of childhood wonder all over again. I did not expect to be so captivated by that unexpected toy as a kid, but it played a big role in my imagination and play. This 1/6th scale version really takes me home every time I look at it.

Samuel Spitale: Hmm, a hard question! All of the ones I worked on as Product Development Manager at Lucasfilm, which is about 95% of the book! I managed the Sideshow license from day one back in 2004 until 2014, so it was amazing to see how wide and deep the Star Wars line went over those ten years. My favorite items changed with each release! But if I had to pick a few highlights:

12-inch figures: The IG-88 and General Grievous figures really blew me away. They were such a departure from the platform body, and their likeness and possibility really pushed the boundaries of the 12-inch line.

12-inch environment: Yoda’s Hut was a lot of fun because of the number of detailed accessories that came with it; likely the most pieces for any single product that we’d done.

1/4-scale maquette: Yoda and Clone Trooper – I just loved the composition. It’s like you hit pause on the film.

Life-size busts: Seeing Bossk and the Gamorrean Guard heads at that scale was so cool. Nothing like that had ever been done before for those characters. They genuinely felt real.

Life-size statues: Salacious Crumb. Talk about identical to the film puppet – and sculpted by the same artist!

Polystone Dioramas: Ambush on Hoth – I loved that pice. What’s great is that it can be displayed from any angle. It works at 360 degrees. And my personal favorite: Fall of the Empire, where three Ewoks take down a stormtrooper. It’s got just the right mix of whimsy, action, and storytelling.”

Black: This statue has had a BIG influence on the fan community. I have seen a lot of cosplays and fan films that draw influence from Sideshow designs. I’m really hoping to see some of his struggles as the caretaker of one of the last hopes for the galaxy in the show. His armor slung over his pack, a nod to his clone war past, is such a nice touch. It shows he was once a warrior and a general. I hope to see some aspect of that in the show.

CS: A fan has to be truly invested in that character to invest in a Legendary Scale or Life Size piece. What kind of extra love do the folks at Sideshow put into those pieces?

Black: Personally, I’m a huge fan of Life Size pieces. From busts to full-size Vaders! They really bring the character to life. Even for a format as truncated as a bust, we try to capture the energy and the personality of that character. Whether that be Maul’s sneer or Kylo’s menacing presence, it’s something I think a lot about when sculpting the subject. Normally when sculpting a portrait, I spend time making the facial expression to really know how it feels and looks. I even do this for masked villains. It feels like some of that still comes through.

CS: Is there a dream Star Wars statue or figure that you would love to see Sideshow create?

Black: Well, my Rancor dream has come true. Other than that, I would personally love to see more EWOKS! Everyone knows they are the true heroes of the rebellion!

Spitale: There are a few 12-inch figures that I’d love to see build out the current assortment, like a Rebel Soldier that can be decked out with Hoth battle gear, but also work as paired down version to represent Echo Base personnel. I’d love to see an ultimate Han Solo similar to their recent Luke Skywalker, which included all his costume changes from Return of the Jedi; a Han with removable vest and trench coat would be awesome. And Walrus Man would be a great addition to the Cantina aliens, but only if he comes with a severed arm!

CS: What’s something surprising you were unaware of about the Sideshow process prior to doing this book?

Spitale: I think what struck me most while working on this project was seeing the evolution of product over the last 15 years. This book is a visual history that illustrates how advances in technology have allowed the Sideshow artists to capture likeness and detail in ways we couldn’t have imagined in the early years. They continually top themselves with each new item released, and I can’t wait to see what they do next.”