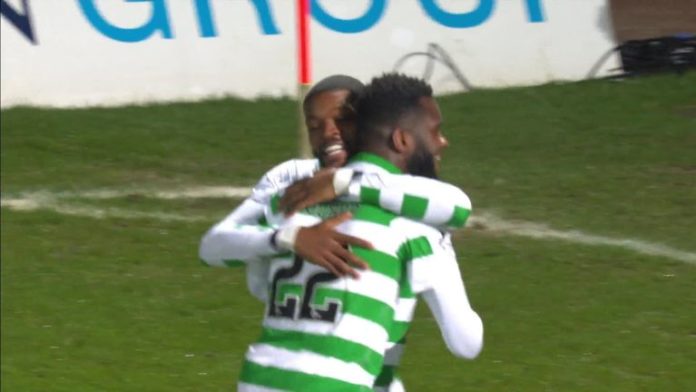 Leigh Griffiths has apologised to the Kilmarnock fan he targeted with some scrunched-up tape.

Griffiths admits he was “stupid” to throw the tape he had just removed from his socks, after being targeted with abuse after coming off during Celtic’s win at Rugby Park last week.

The incident sparked a row involving a supporter and some of Griffiths’ colleagues on the bench, with stewards getting involved.

Griffiths said: “I think it got blown out of proportion. I was getting a bit of abuse and I shouldn’t have thrown the tape. It was stupid of me.

“But it’s water under the bridge now. I am trying to keep my head up and look forward.

“Any player that gets stick, it is hard to block it out. It was so close to the bench, the tape was in my hand, and it was just a quick reaction.

Meanwhile, Griffiths is refusing to look ahead to Scotland’s Euro 2020 play-off campaign but hopes his rejuvenated form has been noticed by Steve Clarke.

Griffiths has already scored as many goals this year as he did in 2019 after netting his third in four matches in Wednesday’s 3-0 win over St Johnstone in Perth.

The 29-year-old last featured for Scotland in a 2-0 win over Albania in September 2018 before dropping out of international and then club action while he battled mental health problems and then some fitness issues following his comeback in July.

And he was not getting carried away about his upturn in form after being questioned about his hopes of facing Israel on March 26.

“It’s too far away,” he said. “I am just concentrating on hopefully getting picked again on Sunday against Hamilton.

“Listen, it will be a nice bonus if I am in the squad and get the chance to play again but it’s still a couple of months away.

“As long as I am performing on the pitch and doing well for Celtic, then hopefully I will be in contention but that’s not up to me, it’s up to the manager of Scotland.

“I think he was at the Kilmarnock game last week so hopefully I did enough to impress him but if not I will keep working hard and doing what I can do for Celtic. I can only do my job for Celtic and see what happens for March.”

The former Hibernian striker believes he has some way to go before he hits peak sharpness.

He said: “I am probably 75-80 per cent. I still have a bit to go and can still get a bit fitter. But as long as I am playing games and working hard in training, that will come.”