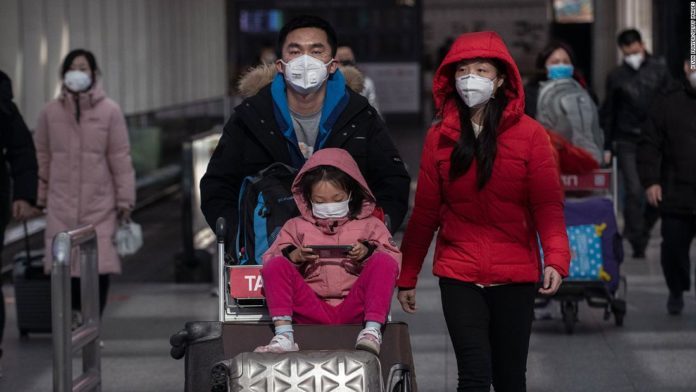 Japan’s Nikkei 225 (N225) jumped 1.1%, while Hong Kong’s Hang Seng Index (HSI) rose 0.7%. South Korea’s Kospi (KOSPI) moved up 0.3%.
The Hang Seng had lost more than 5% in the past two trading sessions. The Nikkei and Kospi each closed Thursday 1.7% lower.
The coronavirus, which originated in central China, has now spread around the world. More than 200 people are dead and more than 9,600 people have been infected in mainland China. There have also been dozens of confirmed cases elsewhere, including India, the Philippines and the United States.
The World Health Organization has declared coronavirus a public health emergency of international concern.
Separately, China’s factory activity weakened ahead of the coronavirus outbreak, according to official data released Friday. The purchasing managers index for manufacturing reached 50 this month, lower than last month’s 50.2 but in line with what analysts polled by Reuters expected.
Non-manufacturing PMI, a key indicator for the services sector, rose to 54.1, which was above December’s 53.5.
A reading above 50 indicates growth from the previous month.
“The PMIs are usually valued as being among the first pieces of data released for an economy each month. But China’s January PMI surveys have been overtaken by subsequent events,” wrote Martin Lynge Rasmussen, China economist for Capital Economics, in a research note. “The following months’ PMIs will give insight into how damaging the virus is.”
He noted that the PMI surveys ended January 20, the same day Chinese President Xi Jinping publicly stated that the outbreak was serious.
Elsewhere, South Korean electronics maker LG reported sales of 62.3 trillion won ($52.5 billion) in 2019, a rise of 1% compared to 2018. Operating income fell about 1% to 2.4 trillion won ($2 billion).
Earnings were dragged down by the poor performance of LG’s smartphone division. Sales of LG phones for 2019 plummeted 21% to 1.3 trillion won ($1.1 billion).
Shares in LG dropped 0.7% in Seoul.
— Sherisse Pham contributed to this report.